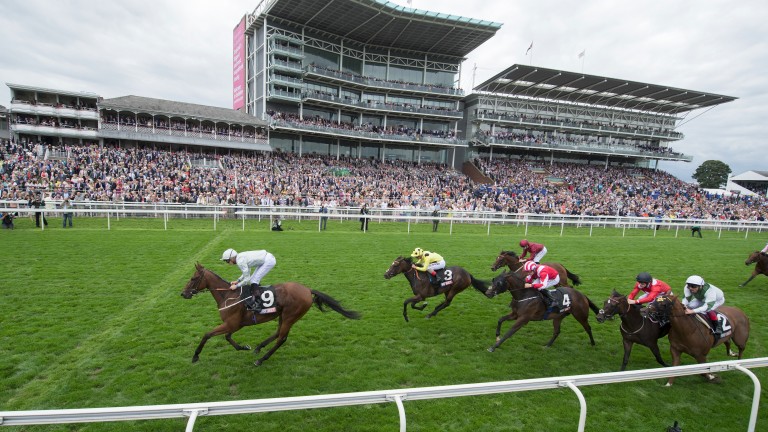 For a non-betting man, Mark Johnston is quite a shrewd gambler and another expensive speculation paid off in fine style with Threading.

The trainer makes no secret of the fact that he sees more to racing than punting – John McCririck he is not – yet the nature of his job means that he sometimes has to do a JP McManus and back his judgement with hard cash.

That happens when it comes to deciding whether to supplement a horse for a race for a five-figure sum – £15,000 in the case of the Sky Bet Lowther Stakes.

He decided to take the plunge with Sheikh Hamdan bin Mohammed Al Maktoum's filly, who had certainly looked highly promising in making a successful debut at Goodwood three weeks ago.

Yet Dee Ex Bee had shaped even more encouragingly at the same meeting, only to trail in well beaten here on Wednesday, and the trainer admitted: "After that disappointment you start to wonder a little bit."

He need not have worried. The ill-fated Permian had rewarded Johnston's decision to add him to the Dante Stakes here in May, if not for the Derby the following month, and Threading earned nearly ten times the late entry fee with victory here.

"You can never be sure but it's been a good year for that," Johnston said. "We've supplemented for three – the Derby, the Dante and this – two out of three is not bad."

Range of prices in Classic market

Threading did her job well, keeping on strongly to score by a length and three-quarters under James Doyle and earn quotes ranging from 12-1 to 33-1 for the Qipco 1,000 Guineas.

Johnston is not a man to concern himself with the ante-post market, but he said: "You'd say there that she could be a Guineas filly. She stayed the trip very well and started to pull away right at the death."

As for a more immediate target, the trainer said: "You start thinking of the Cheveley Park but we haven't really discussed it.

"She won on soft ground at Goodwood and she's won on easy ground again. A lot of people think that Exceed And Excels almost invariably need fast ground – I think it would be wrong to pigeonhole her as needing soft ground and it would be very interesting to see her on a sounder surface."

Potential round two in the Cheveley Park

Threading could face a rematch with runner-up Madeline if she goes to Newmarket.

Madeline's trainer Roger Varian said: "She's run well but it wasn't ideal because she was drawn on the outside and could never quite get cover. Andrea [Atzeni] said that could have made the difference.

"I'm sure she'll be better on drier ground. The Cheveley Park will suit her because it's a stiffer six furlongs."