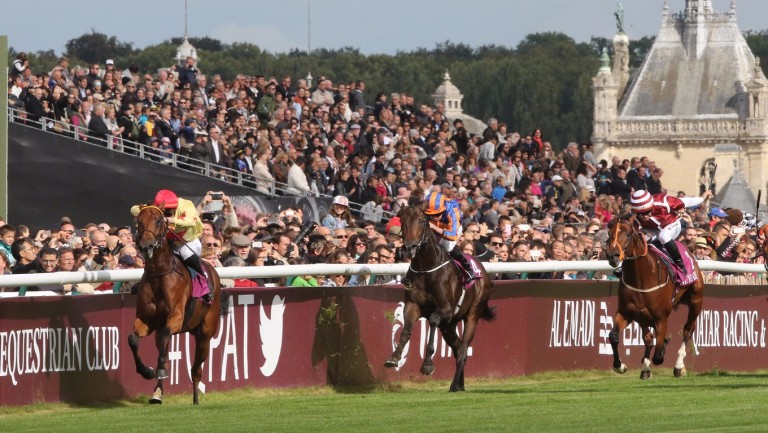 Twice in the last four renewals the Feilden winner has gone on to land a Derby, with Golden Horn going on to Epsom glory two years ago while 2013 winner Intello landed the French equivalent.

Sylvester Kirk's favourite Salouen is the only one of the seven runners with a Derby entry and his trainer, who is delighted to still have such a talented horse in his yard, is dreaming big.

"I'm hoping he's a Derby horse," said an excited Kirk. "I don't usually get to keep a horse like him, they usually move on, so it's a real pleasure to have him and that's the route we're going to take. He looked like he needed a trip last year and we'll take on the big boys – we may as well give him a try at it."

Money talks
Four of the last six renewals have gone to the favourite and Stipulate (at 8-1 in 2012) is the only winner in the last ten years to have returned an SP larger than 9-2, so it pays to stick to those at the head of the market.

Johnston factor
Mark Johnston is the only trainer to have won this race multiple times in the last ten years, saddling Campanologist to victory in 2008 and Dordogne in 2011. He saddles Montataire this year.

Bruce Raymond, racing manager to Saeed Manana, owner of Law And Order
He won a Listed race at Lingfield ten days ago so he has race fitness on his side. I think he has a good chance despite the penalty.

Marco Botti, trainer of Al Hamdany
He's been working well. He had a nice winter and seems stronger than last year. I think he'll stay the trip, he was always doing his best work at the finish so I'm looking forward to stepping him up. It's a competitive race and the favourite is rated 110, which is quite high, but we expect him to run a good race. I think he'll be up to Listed, or maybe even Group 3, class.

Ed Dunlop, trainer of Apex King
I'm pleased with the way he's wintered. He hurt himself in the Solario so didn't run again. We're pleased with the way he's been working and as long as the ground doesn't get too quick we'll run him. He's by Kodiac, but he's out of a Rainbow Quest mare so we wanted to try the longer trip and he's in the French Derby because he's a horse we like. He did everything right last year before hurting himself but he needs to improve and he's in the same boat as everything else at the moment – he's just a talking horse until we see it on the track. Salouen looks hard to beat on ratings.

Andrew Balding, trainer of Max Zorin
He has decent form from last year and I think he's improved over the winter. He's in great form and things are looking pretty good so I hope he'll run well. It's a bit of a fact-finding mission in this class, but I'd be very hopeful he'd stay at least a mile and a quarter.

Mark Johnston, trainer of Montataire
It's his first run of the season and we have 7lb to find officially on the favourite and 1lb to find with Law And Order and I'm a great believer in that so he'd have to run the race of his life to win, but that's not impossible as he's a young horse and the rest of them are not as unexposed as you would usually see in a race like this. It was an obvious starting point for a horse like him with no penalties and I'm pretty confident he'll get the trip.

Sylvester Kirk, trainer of Salouen
He's in good form and seems to have trained on – he's certainly working well. The ground should suit tomorrow and I've got Ryan [Moore] to ride him so I was keen to run rather than wait for Sandown, Lingfield or Newbury. He might just need it but it's a good starting point for him.