Everybody needs good neighbours – and Chester racecourse fits the bill 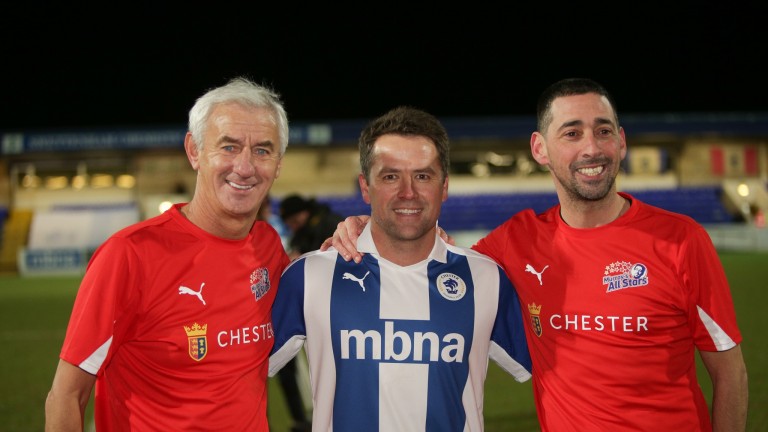 Last month it emerged the supporter-owned Chester FC had run into financial difficulties, but the city’s racecourse stepped in to support a star-studded match to raise funds for its neighbour.

Chester racecourse, in partnership with MBNA, provided Puma kits for the Select XI and Colin Murray’s All-Stars, with those donning the shirts including Michael Owen, one of the match’s coordinators, his father Terry, who played for the club in the 1970s, former Liverpool forward Neil Mellor and Murray himself.

The match, put together in only 12 days, raised £25,000 for the Blues – helping to smash the fundraising target of £50,000 – with more funds expected through the auctioning of signed kits.

Chief executive of Chester FC Community Trust chief executive Jim Green said: “Chester FC is extremely grateful to Chester Racecourse and MBNA for their support. It was an amazing evening and the response from the public in such a short space of time was incredible.

“The two teams really looked the part on the pitch thanks to the generous kit donations and we hope that the shirt auction will take us past the £80,000 mark.”

A crowd of more than 2,000 people attended the match, which was the brainchild of director Jeff Banks.

While 2018 has so far been marked by a number of jockey retirements, Adele Mulrennan is moving in the opposite direction, donning her boots again to take part in perhaps one of the most competitive charity races ever seen.

“I haven’t ridden professionally for six years,” said Mulrennan, who has been riding out for Sue Smith and Michael Dods. “I didn’t have to call on the IJF, but my husband has on many occasions and it’s nice to give something back.”

Mulrennan, who will be riding one of Dods’s runners on the day, will also be presenting at the track during the meeting.

“It will keep my mind off it!” she said.

FIRST PUBLISHED 3:30PM, FEB 28 2018
I didn’t have to call on the IJF, but my husband has on many occasions and it’s nice to give something back