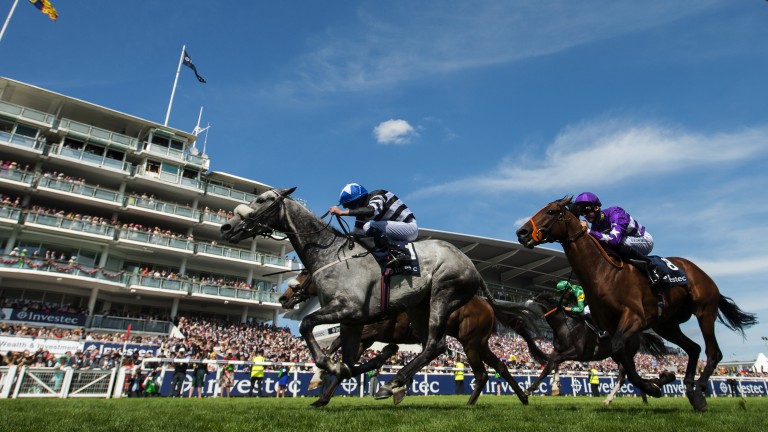 It might have been 'only' a Group 3, but for Ruth Carr and James Sullivan the Investec Diomed Stakes might just as well have been the Derby itself, such was their joy at a third successive win with recent arrival Sovereign Debt.

Carr, feared that a 5lb penalty might be too much for the popular eight-year-old, pointing out that "weight stops trains", but after Sovereign Debt had travelled well throughout and held his contemporary Gabrial by a neck she is regretting not making a Group 1 entry for him in Royal Ascot's Queen Anne Stakes or Goodwood's Sussex.

A supplementary entry is not out of the question, and she admitted it was something she had looked into. However, she said: "It's a lot of money and I'm a Yorkshirewoman. I did look after Sandown and I thought, 'bloody hell'. I can't repeat how much it was [£50,000] but it was a lot. That might have to be revisited now though."

She added: "I came here prepared to be beaten, but he's a real trier and he wants it. He just keeps upping his game all the time for us and has exceeded all of my expectations. He's not in the Sussex either, but the QEII might be an option."

It was equally special for the jockey, who said: "Sandown was my first Group win and every time I ride him it's my biggest race to date. He's a big chapter in my life.

"He deserves a chance in a Group 1 if the right race comes along. He's a superstar of a horse."

A different type of fireworks

A day after an Oaks run in a thunderstorm, Laugh Aloud delivered the pyrotechnics on the track with the same outcome - victory for John Gosden in the Group 3 Princess Elizabeth Stakes.

Until yesterday the Godolphin filly had recorded all three wins from the front but, settled off the pace for this first step into Group company, her response was devastating as she stormed clear of Absolute Blast and Tisbutadream to win by five lengths under James Doyle.

Gosden, who won the Oaks with Enable, said: "She likes it in front but I said to James there were a couple of others that like to go on. I like the way she relaxed off them, let them fight it out, then swung out and kicked the race into touch."

The trainer nominated the Group 2 Duke Of Cambridge Stakes at Royal Ascot, for which she was slashed to 9-4 from 16-1 by Betfair.

Doyle said: "It was an explosive performance. It was nice she settled so well. I pulled her into a bit of space and she just took off. It was really impressive. She quickened up so well and felt very good today."

Trainer Archie Watson said: "It's great to have a filly of that quality in the stable and I'm sure she'll win a Group race for her owners. She won't go to Royal Ascot and we'll aim instead at a Group 3 in Germany at the beginning of next month."

Oisin Murphy suffered a nightmare passage on Andrew Balding's Brorocco in Friday's 1m2f handicap, but he made no mistake on stable companion Drochaid in the three-year-old equivalent that traditionally opens the Derby day card.

Murphy, who picked up a seven-day ban at Kempton on Wednesday and must be very conscious of the speed with which his suspensions are totting up, rode a copybook race and said: "It's always great to ride a winner on the big days, especially for Andrew."

Balding, who has a tilt at the Park Hill Stakes, or possibly even the St Leger for his Oaks fourth Horseplay, is eyeing a handicap at Newmarket's July meeting for Drochaid next.

Finishing last in the Triumph Hurdle is not the normal preparation for a winner on Derby day, but it worked for Soldier In Action who landed the 1m4f handicap.

Trainer Mark Johnston said: "He went away hurdling for Nicky Henderson and won once but he lost an awful lot of weight and it's taken a while to build him back up.

"He had a very hard race at Cheltenham and Nicky said he was a bit embarrassed to send him back because of of the weight he had lost. But we wanted him back in a hurry and it's paid off."

A stable star
"It will be a sad day at Musley Bank when Gabrial leaves. He's taken us to every cock fight and we've been all over the world with him!"

Kirk referred
Sylvester Kirk was referred to BHA head office after sachets of norodine granules, an oral antibiotic, were brought into the racecourse stables contrary to the rules.

Kirk, who had four runners including Salouen in the Derby, said the substance had been prescribed for two horses in his yard and inadvertently added to the kit bag before heading to the races.

Norton ban
Franny Norton will miss four days of Royal Ascot after collecting a seven-day careless riding ban. Norton was found to have caused significant interference on Emenem on the way to finishing second in the opener. The ban runs from June 17-23.

Two rides in Britain in the last five seasons, one in the 2,000 Guineas and the other in the Derby which he won on Wings Of Eagles. Padraig Beggy knows how to pick his mounts.