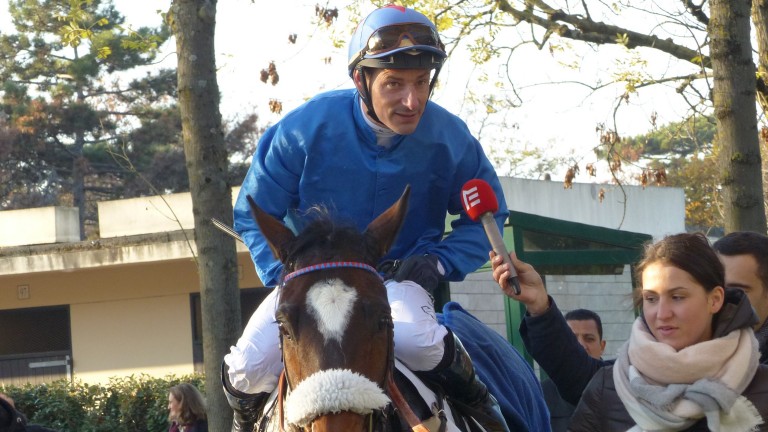 Soon-to-retire Jacques Ricou is interviewed after landing the big of the day at Auteuil
Racing Post / Scott Burton
1 of 1
By Scott Burton UPDATED 5:11PM, NOV 17 2018

The day after announcing this month would be his last as a jockey, Jacques Ricou showed he still had talent and desire in abundance when landing the big handicap of the day at Auteuil on Magistador.

A five-time champion jumps jockey in France, Ricou made his name with Guillaume Macaire and in the early part of his career was associated with Jair Du Cochet, a multiple winner in Britain whose triumphs included the Feltham Novices' Chase at Kempton, the Pillar Property Chase at Cheltenham and the Peterborough Chase at the expense of Best Mate.

His 133 wins in 2006 was the highest number by a jumps jockey for a calendar year in France since Alec Carter in 1907, while more recently Ricou struck up a terrific partnership with Milord Thomas, winning a Grand Steeple-Chase de Paris and the Prix Haye la Jousselin three times.

The pair will have one last chance to add to Ricou's glittering CV in the Grade 2 Prix Georges Courtois at Auteuil next Sunday, before the 38-year-old jockey calls it a day on November 30 at the end of a career stretching back more than 21 years.

Ricou spent the winter in 2015-16 in Ireland with Willie Mullins, an experience he cited among the greatest of his life when breaking the news of his retirement to Le Parisien on Friday.

Ricou has struggled for decent rides and on Saturday was celebrating only his 13th winner of the year when making all on Magistador for trainer Mickael Seror.

He said: "I learned a long time ago that it's horses that make men and without them you can't do much. I have to thank Mickael Seror, who has kept faith in me even in the less glorious moments and, believe me, in terms of morale being a jockey is hard."

Keep up with all the latest international developments and race reports at racingpost.com/news

FIRST PUBLISHED 4:52PM, NOV 17 2018
I learnt a long time ago that it is horses that make men and without them you can't do much