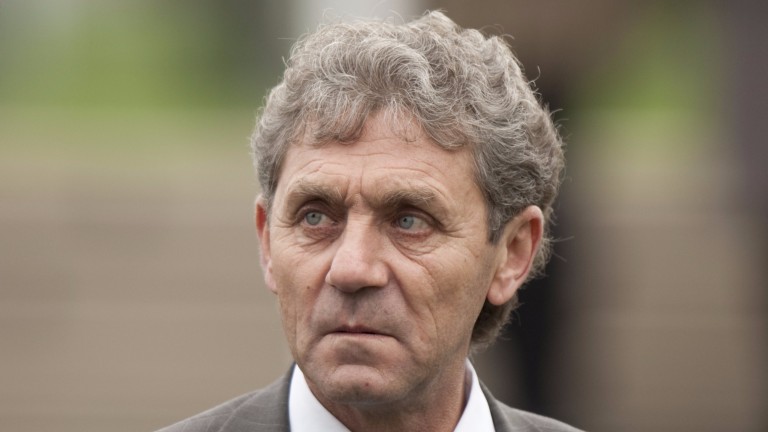 David Evans: fined a total of £3,140 for conduct prejudicial to horseracing and failing to notify the Racing Calendar office of a non-runner
Edward Whitaker
1 of 1
By Jack Haynes UPDATED 8:06PM, NOV 6 2017

Trainer David Evans was a relieved man on Monday afternoon after admitting he was anticipating his licence being suspended following his betting-related hearing at the BHA.

Evans was instead fined £3,000 for a first breach of rule (A)30.1 – conduct prejudicial to the integrity, proper conduct and/or good reputation of horseracing – and £140 for not immediately notifying the Racing Calendar office of a non-runner.

The Monmouthshire trainer admitted to being intent upon “nicking a bit of extra value” when backing Black Dave before withdrawing stablemate and market leader Tango Sky in a 6f handicap at Wolverhampton in January 2015, and he described Monday afternoon's disciplinary panel verdict as "very lenient".

Evans said: "I'm relieved – it's a very lenient verdict and I'm glad it's over. I was expecting maybe a two-or-three-month suspension.

"It was a strange case, but when it could have been up to three years' disqualification I have to be pleased. It was a very fair panel."

He continued: “Most punters would probably approve of what I did – none of my owners has taken offence.

“The case had been going on for so long that I half forgot about it, then the notification came through – my wife has been more worried than I have.

"I’ve never been here before and I don’t want to come here again.”

On calling Ladbrokes on the morning of the race, the firm offered Evans 4-1 for a bet of £6,000 on Black Dave, better odds than the available 7-2.

In Monday's hearing, Keith Page, regulatory development manager at what is now Ladbrokes Coral, described Evans as “a highly valued customer”. This was Evans’ largest bet on the account he used.

Four minutes after the call, in which Evans told a Ladbrokes trader stablemate Tango Sky was going to be withdrawn, they shortened Tango Sky to 3-1 (from 7-2), leading to a rule 4 deduction taking 25p from every £1, rather than 20p, on all bets in the race before Tango Sky was pulled out.

Evans declared Tango Sky a non-runner – with a vet’s certificate obtained the evening before stating the horse was “not sound” – almost an hour after placing his bet with Ladbrokes, and at BHA headquarters in London on Monday claimed he was not aware of the requirement to immediately notify the Racing Calendar office about a non-runner.

In the meantime, on the day itself, Evans advised at least three of the yard's owners to back Black Dave, who started 6-4 favourite but finished fourth.

Page said: “It’s a regular occurrence to offer a better price to a certain profile of customer or a long-term customer, while Tango Sky’s price was cut to bring it in line with industry prices at the time.

“There are two theoretical possibilities to the reason behind the price change for Tango Sky – either it was a very cynical price change in order to affect the subsequent Rule 4 or our traders were alerted to something not being right about the market, so they shortened the price of the market principals.

“Despite Mr Evans informing our trader Tango Sky was going to be declared a non-runner, you sometimes can't take all the information you receive as true – you have to take everything with a pinch of salt.

"We could have lengthened the odds and the price could have been snaffled up with the information wide of the mark.”

Timeline of events on the raceday

Delivering their verdict, panel chairman Timothy Charlton QC said that a £4,000 fine was appropriate but that it should be reduced to £3,000 due to Evans' honest answering throughout the process and the long delay in a disciplinary hearing being held.

Charlton said: "The sport has a fundamental interest in honest and accurate betting markets and Mr Evans' failure to notify a withdrawal promptly was a base cause of a false position existing for an hour or so on the morning of January 9, 2015, even if this caused little or no loss to others and would have been of small benefit to Mr Evans and friends."

"Stretched resources" and "changes in personnel" were among the reasons provided by the BHA for it taking almost three years after the race for the case to come to a conclusion.

No-one from Ladbrokes was available to comment post-inquiry but they may do so on Tuesday, while the BHA indicated they wished to assess the panel's full written reasons before considering whether to comment.

BHA to appeal against disciplinary panel's decision in Hobbs case

FIRST PUBLISHED 2:21PM, NOV 6 2017
I'm relieved – it's a very lenient verdict and I'm glad it's over. I was expecting maybe a two or three-month suspension