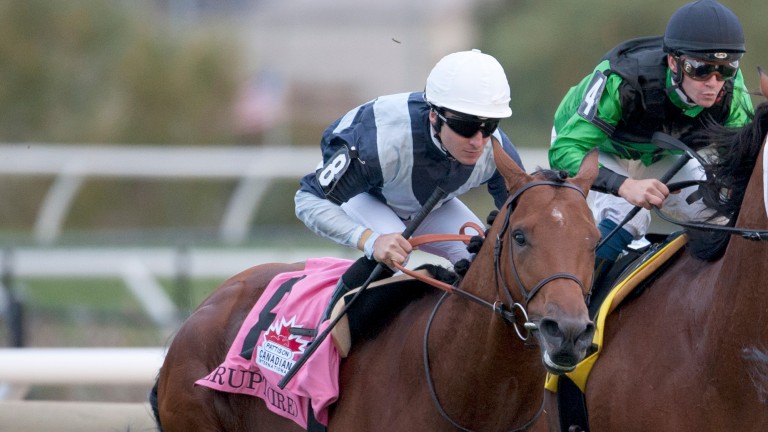 Erupt: ridden by Pierre Charles Boudot is one of three European challengers
1 of 1
By Howard Wright in Tokyo 6:00PM, NOV 25 2016

Snow in Tokyo in November, for the first time since records began in 1875, has hardly helped the cause of the European trio – French-trained Erupt and the German pair Nightflower and Iquitos – who tomorrow attempt to close an 11-year gap since an overseas runner landed the Japan Cup, the country’s oldest international race.

First contested in 1981, the Group 1 prize fell into foreign hands 12 times in the first 17 years, but has been marked for export only twice in 18 runnings since, with 41 overseas contenders having tried and failed, and 28 finishing in the bottom half of the field, since Alkaased took the spoils back to Newmarket in 2005.

Erupt, beaten a little over two lengths when sixth in the race last year, trainer Francis Graffard said: "He did us proud last year but is now stronger, more mature and has improved from three years to four, although I hope there’s not too much rain before the race."

Pierre-Charles Boudot rides Erupt and therefore opposes the man whose European Flat winners record he surpassed earlier in the week, Peter Schiergen, who saddles Nightflower, an unlucky 11th here a year ago and recipient of a tricky draw in stall 15 this time.

Iquitos broke his duck in Group 1 company by beating Nightflower in the Grosser Preis von Baden in September, but would prefer softer underfoot conditions than he is likely to encounter.

Connections of Erupt and Iquitos are guaranteed a payout of $100,000 each, having won one of the 24 qualifying international races this year, in so doing becoming eligible for a $1 million bonus should they win the Japan Cup.

But local professionals are confident the near-£1.7 million first prize will stay at home, and the market is dominated by Japanese-trained runners. Ryan Moore’s mount, Real Steel, who won the Dubai Turf in March under Britain’s three-time champion jockey, is vying for favouritism with British and Irish bookmakers at around the 4-1 mark with Gold Actor and Kitasan Black.