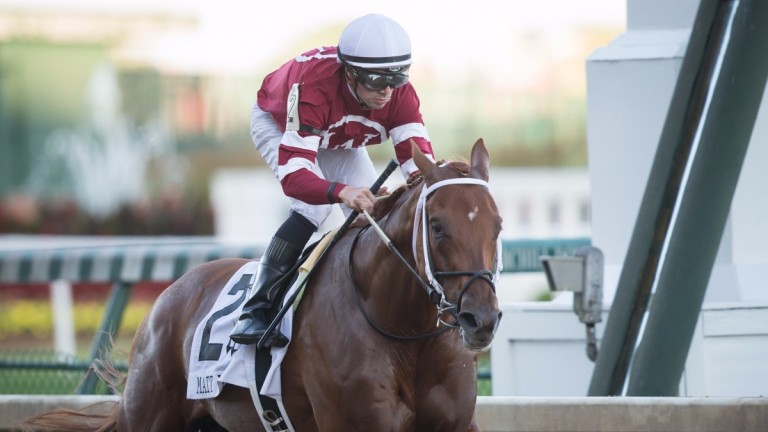 Gun Runner: made the breakthrough at Grade 1 level in November
copyright Wendy Wooley/EquiSport
1 of 1
By Mark Scully 1:51PM, JAN 4 2017

Quarantine restrictions at Fair Grounds racetrack owing to an outbreak of equine herpes virus at the New Orleans venue mean Kentucky Derby third Gun Runner could miss out on a start in the Pegasus World Cup later this month.

Connections had seemingly cooled on a crack at Breeders' Cup Classic one-two Arrogate and California Chrome in what will be the world's richest race at Gulfstream Park on January 28.

However, the colt's owners Winchell Thoroughbreds and Three Chimneys Farm are now reportedly keen to run the Steve Asmussen-trained colt in the $12m contest – but his participation is under threat owing to the restrictions at Fair Grounds.

Gun Runner has been stabled at Fair Grounds, where he won a pair of Grade 2s including the Louisiana Derby last winter, since he finally reaped the reward for a series of fine efforts in top company with a Grade 1 triumph in the Clark Handicap at Churchill Downs in November.

However, no horses are currently permitted to move in or out of the track after an area of it was placed under quarantine due to an EHV-1 (equine herpes virus) outbreak.

While that could impact on Gun Runner's travel plans to Gulfstream Park near Miami, it could also affect his connections' ability to strike a deal with an owner of a starting slot in the race, which they do not yet have, having declined to pay the $1m price at the initial sale.

Despite the complication, Winchell Thoroughbreds manager David Fiske says his team is still preparing as though they are going to get the green light to run in the race.

"We're just kind of monitoring the quarantine as it seems to change day by day," Fiske told the Blood-Horse. "We keep getting inquiries and proposals from gate owners but they're all aware of the situation now, too, so they're kind of apprehensive.

"I just talked to Steve a little while ago trying to get a sense of when our drop-dead date [for the Pegasus] would be, but I'm not sure we've gotten there yet.

"We're still preparing him like he's going to go. Unless some state vet or someone tells us we're not going, we're kind of thinking that we are.

"If the quarantine thing works out and if we can work out a deal with somebody that makes some sense – which is a lot harder than you would think – he'll go. But there are a lot of question marks still."

FIRST PUBLISHED 1:51PM, JAN 4 2017
We're still preparing him like he's going to go. Unless some state vet or someone tells us we're not going, we're kind of thinking that we are