Equine Flu Outbreak BACK IN BUSINESS 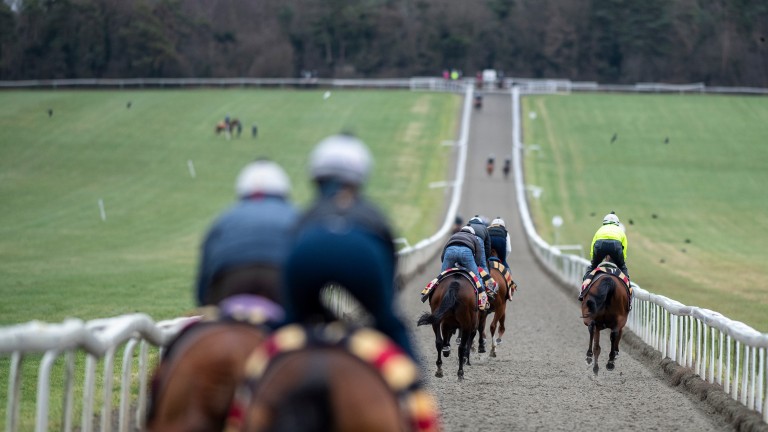 Newmarket's equine population exercise on the Heath. The Flat racing centre has been rocked by the news that four of Simon Crisford's string have tested positive for equine flu
Edward Whitaker
1 of 1
By David Baxter UPDATED 11:06AM, FEB 12 2019

Racing will wake up to good news on Tuesday after an unsettling week and nervy Monday night while the BHA wrestled with letting racing resume following the equine flu outbreak.

Last Thursday morning many awoke to find racing had been cancelled due to the flu alert and the following Monday was quickly identified by the BHA as D-Day for a decision on whether six days would amount to a sufficient shutdown period.

An industry veterinary committee was key to the cessation of racing, and the same committee gave the BHA confidence to lift the ban late on Monday night.

The BHA statement added: "This decision to return racing in a controlled, risk-managed manner was unanimously supported by the industry veterinary committee."

Brant Dunshea, BHA's chief regulatory officer, said: "After analysis of thousands of samples, and no further positive tests on Monday, we still only have two confirmed sites of infection. We have put robust containment measures in place around both.

“From the testing and analysis conducted the disease appears to be contained at present.

"Clearly, there is some risk associated with returning to racing. This risk has been assessed and, based on the evidence - and ensuring biosecurity measures are in place – the level of risk is viewed as acceptable."

The Animal Health Trust has been in the midst of analysing thousands of equine nasal swabs from racehorses in Britain, and optimism had been raised of racing returning following two batches of swabs, numbering well over 1,000, coming back negative through the weekend.

Late on Sunday night hopes looked to have been dealt a blow when it was revealed there had been four positive tests for the highly contagious virus from Simon Crisford's Newmarket yard.

That took the total number of known cases in racing yards to ten, following six positives from Donald McCain's Cheshire base.

Crisford's stable was one of 174 to be placed in lockdown, in his case because he had a runner at Newcastle last Tuesday, after which Sedgefield trainer Rebecca Menzies, who had also had runners at the meeting, reported a 'suspicious' case.

However, all the horses at Menzies' yard subsequently tested negative for equine flu and Crisford revealed the test on his runner at Newcastle – Sajanjl – has returned negative as well.

A statement released by Crisford read: "None of the four horses who returned a positive test for equine influenza displayed any clinical sign of respiratory illness, including nasal discharge and elevated temperatures, prior to the mandatory swabbing undertaken on Friday.

"The swabbing occurred following Sajanjl's race at Newcastle last Tuesday and she's tested negative. There's no obvious connection between the filly and the four identified horses.

"All horses at Kremlin House Stables, totalling 92 boxes, undergo a strict vaccination check and programme on their arrival. All four identified horses have been vaccinated within the last six months along with the rest of the yard and in line with vaccination protocol." 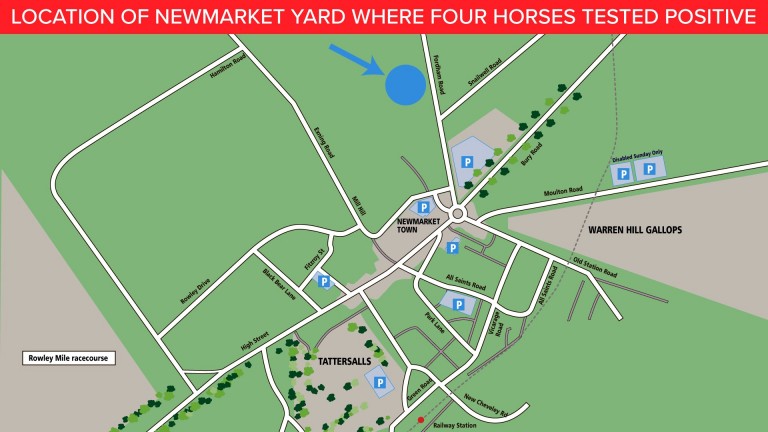 Crisford will be temporarily exercising his string on the Heath in isolation as Jockey Club Estates attempts to ensure the chances of the disease spreading are kept to a minimum.

Newmarket is the largest training centre in Britain with around 80 trainers overseeing in the region of 3,000 horses. The town centre divides the training grounds into two with Bury Side to the east and Racecourse Side to the west, with trainers sharing facilities across the 2,500-acre site. It is also home to two racecourses, the Rowley Mile and the July Course, and acts as a huge breeding centre.

Plumpton and Musselburgh, which lost its last two meetings to a combination of the weather and the flu, are the two tracks which had prepared for the BHA affirmative with preparations in place.

Plumpton clerk of the course and head groundsman Mark Cornford said on Monday: "We've set the track up ready and I've got my fingers crossed.

"It's heavy ground but things are improving. It was dry most of yesterday during daylight hours and has been dry today. If we get as far as declarations it should be more soft, heavy in places."

Several big races are imminent on the jumping calendar, while Tuesday marks four weeks until the Cheltenham Festival.

FIRST PUBLISHED 11:27PM, FEB 10 2019
This decision to return racing in a controlled, risk-managed manner was unanimously supported by the industry veterinary committee

Dunne's barrister claims flaws in Watts but finds Stratford witness unwavering 'Whoa moment' - Stratford attendant says Dunne verbals were out of the ordinary Robbie Dunne alleges threat to break his legs over treatment of Bryony Frost Frost was questioned as though in the dock - and it was not comfortable to watch What has Robbie Dunne been accused of in the Bryony Frost hearing? Bryony Frost: Robbie Dunne 'promised to hurt me and put me through a wing'