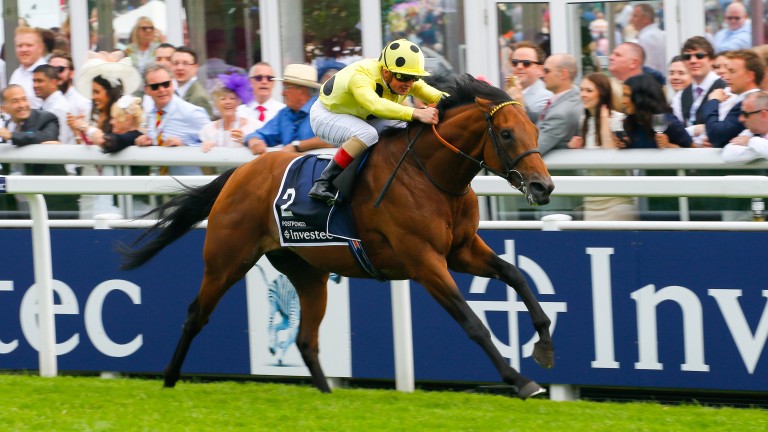 The Investec Coronation Cup will revert to its traditional Friday slot at this year's Derby meeting at Epsom for the first time since it was switched to the Saturday in 2012.

To allow the race to be accommodated on Oaks day, the Group 3 Investec Diomed Stakes will move from the Friday to the Saturday.

Since the Coronation Cup moved to the Saturday, the Group 1 contest has been won twice by St Nicholas Abbey, as well as by Cirrus Des Aigles, Pether's Moon and Postponed.

"Between 1997 and 2011 the Investec Coronation Cup was run on the Friday, and was moved to the Saturday in 2012 as part of the Queen's Diamond Jubilee celebrations in that year," said Epsom's head of racing and clerk of the course Andrew Cooper.

"We believe the reversion of this historic Group 1 race to the Friday gives a significant boost to the race programme on that day, whilst the Investec Derby stands head and shoulders above all other races on the Saturday."

Cooper described it as "a tweak rather than something major", and said the possibility of moving the race has been considered every year since its switch to the Saturday.

"The race seemed to work okay on the Saturday but the far greater reasoning is that it adds considerably to the Friday," said Cooper.

"Wherever you place a Group 1 race over a meeting, it's going to add some lustre to that day. We think, on balance, it is better placed on the Friday. It will give a boost in terms of interest and hopefully the crowd on that day.

"Our view is that the Friday has looked a little bit thin, some years more so than others, without the Coronation Cup, and so I think it will add to that day, without taking dramatically from the Saturday when everyone's focus and attention is quite rightly on the Investec Derby."

Both the Friday and Saturday of this year's meeting will be on ITV's main channel.

Churchill is favourite for the Derby and ante-post backers hoping to see the Dewhurst winner at Epsom on June 3 will be cheered to see the son of Galileo has received a slew of entries in France’s Classics and other early-closing races for three-year-olds.

Churchill featured among lists published on Wednesday for races ranging in distance from the mile of the Poule d’Essai des Poulains, through the extended mile and a quarter of the Prix du Jockey Club right up to the Juddmonte Grand Prix de Paris over a mile and a half.

The jury is still out as to any potential stamina limitations for Churchill, who is out of Queen Mary runner-up Meow.

FIRST PUBLISHED 12:54PM, FEB 22 2017
I think it will add to that day, without taking dramatically from the Saturday when everyone's focus and attention is quite rightly on the Derby