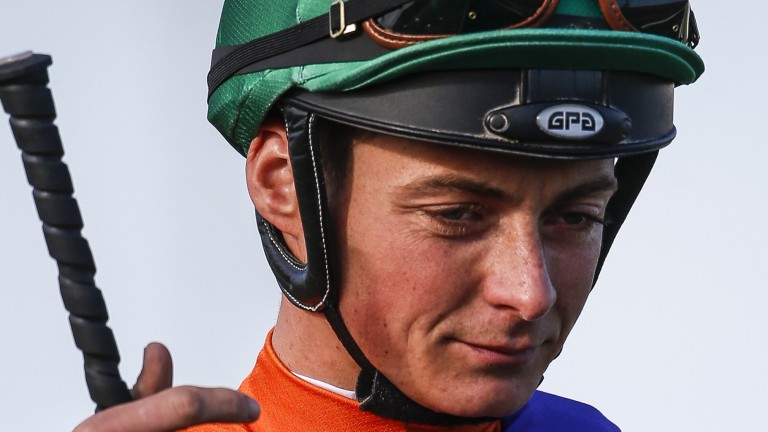 Eoin Walsh: back in the saddle after a nasty fall at Chelmsford in November
Alan Crowhurst
1 of 1
By Kitty Trice 8:00AM, FEB 17 2021

Flat jockey Eoin Walsh is targeting a March return to race-riding having recovered from a horrific fall at Chelmsford in November that resulted in him breaking three bones in his back.

Walsh, who is based with Roger Varian, has recently started riding out again and is looking forward to taking the next step back to the racecourse.

He said: "I think I'll be back in the first week of March, it's just a case of getting February out of the way and getting a few rides before the start of the season.

"The recovery went well, I was back in the gym at the Peter O'Sullevan House a week after I fell. They've got a hydrotherapy pool, so I was in the pool on a treadmill taking the weight off my back, there was no impact.

"I had broken three vertebrae and one was 30 per cent crushed, meaning I'd lost half a centimetre in height."

An exciting morning @varianstable stable today, we welcomed back @EoinWalsh3. He has been out of action since his terrible fall at Chelmsford in November, where he broke his back. Thankfully he has made a full recovery, and we look forward to having him back for the season ahead! pic.twitter.com/XV69HGHDDE

The jockey was quick to pay tribute to the Peter O'Sullevan House and Varian, with whom he had been in close contact while sidelined.

He said: "I'm very fortunate to be back riding out in under three months, Peter O'Sullevan House and Roger have been fantastic. There was no pressure to be back, just to make sure I was healthy and return when I was ready."

Walsh will also have the opportunity of partnering a good book of rides for the multiple Group 1-winning trainer, especially given the current rules allowing jockeys to ride at a maximum of one meeting per day.

He added: "Whatever he sends, it is normally a good ride and normally has a chance. Obviously with Andrea [Atzeni], Dave [Egan] and Jack [Mitchell] being the main riders I know my position, but with the one meeting a day rule it has worked out well for me whereby I get the opportunities."

What's on this week: last week's loss is this week's gain as top-class action builds to Ascot Chase

'It's not over yet' – Cobden opens up about jockeys' title chances

FIRST PUBLISHED 8:00AM, FEB 17 2021
I had broken three vertebrae and one was 30 per cent crushed, meaning I'd lost half a centimetre in height