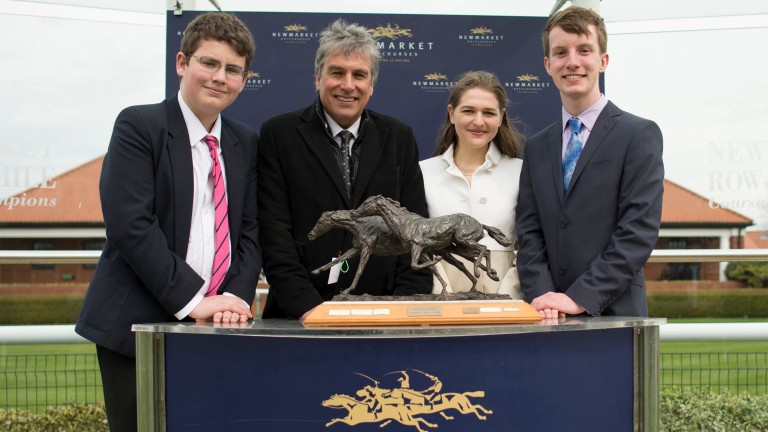 John Inverdale hands out the prizes to Tim Oliver, Lottie Pyper and Tom Cantillon, the 2013 winners of the Martin Wills Awards
Edward Whitaker
1 of 1
By Stuart Riley 12:56PM, JAN 6 2017

The prestigious prize will honour the best racing-themed writing from those aged 26 and under for the 25th and final time at Newmarket's Craven meeting on April 19, with entries closing on February 28.

There is also the opportunity for a week's work experience at the Racing Post for the individual successful in the under 26 category.

The eight prize winners will be given an expenses paid day's racing at Newmarket, with a private luncheon room, and a tour of James Fanshawe's historic Pegasus Stables.

Brough Scott, chairman of the judges - which also include Marcus Armytage, Ed Chamberlin and Lee Mottershead - for the 15th year, said: "Racing has inspired writers down the ages. These awards have kept the flame alive."

John Blake, fellow judge and chief executive of Racing to School, one of the awards' two charity associations along with the National Heritage Centre for Horseracing and Sporting Art, said: "For a quarter of a century the Martin Wills Writing Awards have challenged and inspired creativity in young people.

"All those who have submitted work have been brought closer to horseracing, and with eight prizes on offer and a unique showcase for the winners, the quality of past entries is certain to be maintained.

"The education charity Racing to School is honoured to be associated with what has become an institution and a wonderful opportunity for young people to express themselves through thought-provoking and entertaining writing.”

Eligibility requirements can be found at willswritingawards.co.uk.

The awards were established to commemorate journalist and amateur jockey Martin Wills, who died in 1992 aged 39. Family and organisers behind the Martin Wills Memorial Trust announced last summer they felt 25 years was a good term over which to run the awards, but anyone interested in taking over can contact Liz Ampairee on 07733 331945 or liz@lizampairee.com.