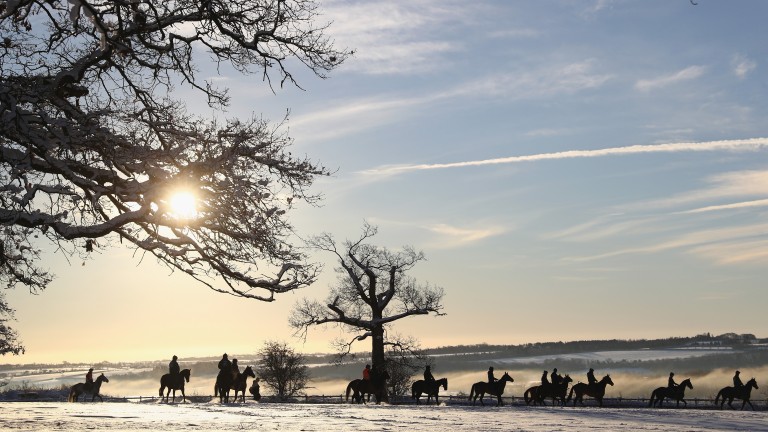 Improved conditions are forecast from Saturday in some places
Michael Steele
1 of 1
By Tom Kerr UPDATED 6:16PM, MAR 3 2018

The ice and snow wreaking havoc on the racing schedule is set to slowly release its grip as the weekend goes on but it is touch and go whether turf racing will resume before the middle of next week.

The Met Office said on Friday that temperatures in Britain are expected to widely hit 5C by the end of the weekend and peak as high as 10C in parts of the south.

That may come too late to save the next scheduled jumps fixtures at Southwell and Lingfield on Monday, however.

The track at Lingfield is frozen and an 8am inspection on Sunday has been called, with racing dependent on how quickly temperatures rise over the weekend, while Roderick Duncan at Southwell said he was "hopeful rather than confident" based on forecasts.

Tuesday's turf fixtures at Exeter and Newcastle are also reliant on temperatures improving to shift snow covering both tracks.

Exeter clerk Barry Johnson said on Friday: "We've got six inches of snow on the track right now. Temperatures are supposed to rise and rain is forecast, which would help, but we're relying on that forecast being correct."

There is six inches of snow on the track at Newcastle as well and raceday clerk Paul Barker said: "There's no rain forecast until Sunday and whether that'll be enough I don't know."Snow has fallen at Cheltenham, covering the track in three inches, but milder weather is expected from Saturday as the countdown to the festival continues.

Clerk Simon Claisse said: "We managed to get the site operational quite early this morning to continue the set-up for the festival. There's been some drifting of the snow around the fences and hurdles in places. We expect the snow to continue this evening but from tomorrow onwards turning to rain and getting milder."

Well done to our groundstaff team who have been out in our 4x4 vehicles all day collecting emergency services and medical staff stranded at their homes due to the snow and delivering them to their workplaces. #SNOWMAGGEDON #snowday2018 #snow pic.twitter.com/exTa2S68UK

Friday's decision to race at Southwell, the sole meeting to survive the weather, attracted some criticism, with a handful of trainers expressing displeasure at the call on social media, which came as transport secretary Chris Grayling urged motorists not to travel "unless they have got a real need to do so".

However, Duncan defended the move, saying: "I don't think it was controversial, my job is to facilitate racing, the track was raceable so we raced.

"Other people would have seen the same weather forecasts as I did, so it was up to them whether they decided to declare their horses or not."

Southwell frozen, temperatures rising from Saturday but may come too late

Lingfield inspection 8am Sunday with the course frozen, temperatures rising from Saturday but may come too late

Fontwell frozen and light snow cover, temperatures rising from Sunday and 18mm of rain forecast from Saturday to Tuesday

FIRST PUBLISHED 6:07PM, MAR 2 2018
I don't think it was controversial, my job is to facilitate racing, the track was raceable so we raced