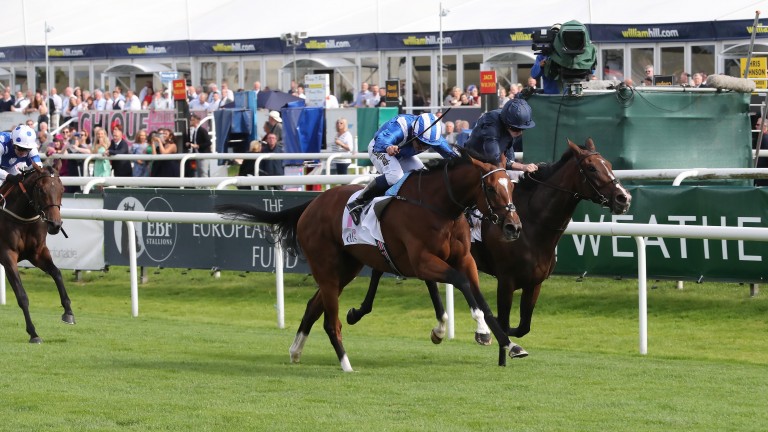 Enbihaar needed every inch of Doncaster's long, galloping straight to get the better of Delphinia and confirm herself as a Group 1 filly in the making with victory in the DFS Park Hill Stakes.

Having slipped turning into the straight, Enbihaar was forced to display great resolution to go with her huge stride as she gradually ground out a short-head success under Jim Crowley.

The John Gosden-trained filly, the only four-year-old in the field and shouldered with a 3lb penalty, maintained her upward trajectory with a third Group 2 success in a row following victories in the Lancashire Oaks and Lillie Langtry.

"She was always doing enough when in front and it was a good performance again giving away lumps of weight," said Crowley. "She's actually slipped on the bend turning in and it took a while to get her confidence back.

"She's a big unit and it's probably taken to the back end of this season for her to strengthen and fill her frame. She's got a massive stride on her, she doesn't do a lot quickly but she really lengthens."

Like Gosden, owner Hamdan Al Maktoum was making his way back from the Keeneland sales and when they return there will be a big autumn target to mull over.

There was a difference of opinion among bookmakers about the performance, with Paddy Power cutting Enbihaar's odds to 12-1 (from 20) for the Qipco British Champions Fillies & Mares Stakes, while some firms went as low as 6-1.

Enbihaar also has the option of the Qatar Prix de Royallieu at Longchamp over Arc weekend, a race upgraded to Group 1 level and extended to 1m6f this year.

Richard Hills, assistant racing manager to Sheikh Hamdan, said: "We've got Ascot as an option and then we've got Longchamp and we'll discuss [it] once everyone returns. It's great that we kept her in training and she has really repaid us. She's a lovely filly with a beautiful action who has done nothing but improve it."

FIRST PUBLISHED 2:57PM, SEP 12 2019
It took her time to get into a rhythm again and she toughed it out brilliantly

Shadwell and Jim Crowley celebrate double on mixed day for Kieran O'Neill Oisin Murphy lands top jockey honours as Foxes Tales storms to Golden Gates win 'Hopefully he's not finished yet' - Rohaan continues his remarkable rise Dream Of Dreams edges out Glen Shiel to finally get his Diamond Jubilee 'What a filly' - Wonderful Tonight a Royal Ascot first for delighted connections Doyle Force: Creative rider off the mark for the week as Appleby bags a 1-2