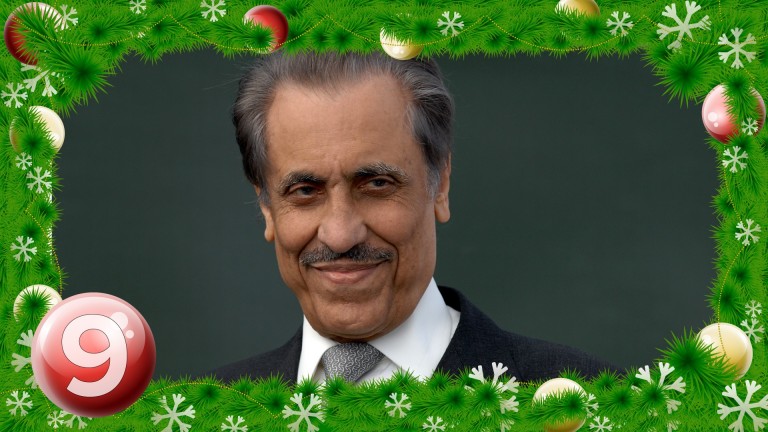 On the ninth day of Christmas, Racing Post gave to me . . . a profile of legendary owner-breeder Khalid Abdullah – first available to Members' Club subscribers on October 1, 2018. Click here for more information and to sign up

When you have scaled the highest peaks, as Prince Khalid Abdullah has with his Juddmonte Farms, it must be difficult to conceive of new challenges. The man who raced Dancing Brave in 1986 must have thought he had reached the summit of thoroughbred ambition. Then along came the genetic masterpiece that was Frankel.

What can the post-Frankel era possibly bestow to keep Abdullah in thrall? Well, there’s Enable’s bid to win a second consecutive Prix de l’Arc de Triomphe for him to contemplate. That would be no mean feat, yet for breeders of Abdullah’s hue the allure always lies beyond the next mountain.

So when the dust settles over Enable’s quest at Longchamp on Sunday, Abdullah might retreat to his Parisian townhouse and contemplate a filly who was foaled seven months ago at his Banstead Manor Stud in Newmarket. The filly is a full-sister to Frankel, the only one of her kind, and just the second filly that Kind, the broodmare who is now 17, has bequeathed him.

This bay filly is priceless, not so much in a financial capacity – although she is plainly worth a queen’s ransom – but through the link of continuity she affords her owner. Her place within Juddmonte’s broodmare band is already assured. A large part of Juddmonte’s success is down to its stringent annual culling policy, yet even if Frankel’s full-sister fails to make the racecourse, there is no prospect of her ever being sold.

That’s the beauty of what Abdullah, 81, has created with Juddmonte. In an apt parallel, the man of royal Saudi roots has unearthed a fertile oil field in which just about every exploratory probe releases torrents of black gold. There is simply no telling which of his regal broodmares will deliver the next champion. And for Abdullah, the most rewarding dividend is that he created the blueprint himself.

“He is hugely knowledgeable about all his horses,” says Juddmonte Group’s chief executive, Douglas Erskine Crum. “He watches all his racehorses on television and receives daily reports on them from [Juddmonte’s racing manager] Teddy Grimthorpe. And he really enjoys visiting his studs, where he sees his stallions and broodmares as well as his yearlings and foals.”

Erskine Crum is best placed to recognise Abdullah’s input into Juddmonte, which embraces five stud farms in Europe and three sizeable adjacent pastures on the outskirts of Lexington in Kentucky. His appointment as CEO more than five years ago saw him assume many of the responsibilities Abdullah had personally overseen since he bought his first racehorses in 1977. Among other things, he has learned that Abdullah’s attention to detail is fastidious.

If time’s passage required Abdullah to seek a helping hand, however, his own hand is still on the tiller. “If there is a decision to be made, I will make a recommendation to him based on what our people feel, and he will either approve it or not,” Erskine Crum says.

“Prince Khalid remains very involved in the direction of Juddmonte. For example, he has the final say on which horses are sold every year, and which trainers are allocated the yearlings.”

Erskine Crum’s brief extends solely to Juddmonte but the mechanics of how Abdullah achieved prominence through his successful business interests are well documented. In 1968 he established Al-Mawarid Holding, the parent company that now presides over commercial ventures as numerous as they are diverse, and in which his sons play an increasingly prominent role.

Abdullah is described as unequivocally the most successful private businessman in the royal House of Saud. Through his global professional reach he absorbed the principles of best practice and applied them rigorously to his breeding and racing interests. Like all new entrants to ownership, he bought his first horses at public auction – his first winner, Charming Native in 1979, was ridden by Lester Piggott – but it wasn’t long before the concept of Juddmonte took shape in his mind’s eye.

“I realised that it would be easier to buy horses and race them, but I got the feeling that this was not enough,” Abdullah told the Racing Post eight years ago. “I thought it would be more fun to do what people like the Aga Khan and Howard de Walden did, and build up your own families.”

Abdullah’s female families have made him an owner-breeder without peer in Europe over the last three decades – and with few peers in the US into the bargain. He has achieved this with fewer numbers than other like-minded middle-eastern potentates. At 800, the head-count of all his horses – stallions, mares, racehorses and young stock – is fewer than Sheikh Mohammed and his entourage have in training alone.

Elegant trophy chests in the Banstead Manor offices groan under the weight of silverware that includes homebred winners of each of the five British Classics, which were annexed within ten years of Juddmonte’s creation, and all five Classics in France.

All told, Juddmonte has bred 26 Classic winners in Britain, Ireland and France. And the emphasis on homebreds – as opposed to all horses that raced in Abdullah’s silks – is such that Dancing Brave’s 2,000 Guineas triumph in 1986 goes unrecorded on the Juddmonte website for the fact that he was bought as a yearling. 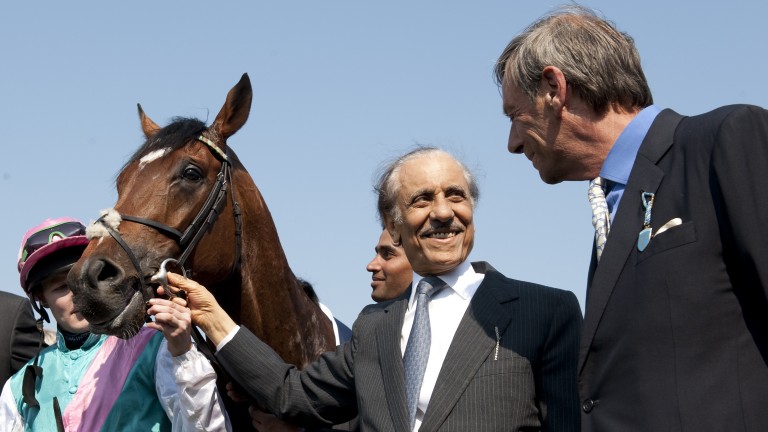 Juddmonte Farms today embraces some 200 broodmares, which deliver superior horses in such quantity that supplementing them with racing stock bought at public auction is surplus to requirements. But the farm’s achievements are not just down to its equine residents. There's an organic theme to the staff.

“Everyone who works for Juddmonte works for one man – Prince Khalid – not the company,” Erskine Crum says. “There is an underlying, fundamental loyalty towards him.

“The UK stud director, Simon Mockridge, has worked for Prince Khalid for 36 years – almost since the beginning. So has Rory Mahon, who still works with his son, Barry, who is stud director of Juddmonte Farms, Ireland. Garrett O’Rourke, general manager USA, has been with him for 26 years, and Teddy Grimthorpe for 18 years.”

There is no denying that a slice of good fortune is prevalent in the success of Juddmonte’s foundation mares. Bloodstock agent James Delahooke was responsible for acquiring most of them, although Abdullah arrived on the scene in 1977 with horses bought by Humphrey Cottrill and trained for him by Jeremy Tree.

Cottrill had outlived Tree by six years when he died in 1999, yet to this day Abdullah treasures his memories of both men. Their early auction-ring restraint made the perfect foil for an impetuous prince who wanted to engage with the sport in double-quick time.

Abdullah had waited long enough. His love of racing crystallised in 1956, when he visited Longchamp frequently with friends while living in Paris. Although he resolved there and then to take out his own silks, 21 years would pass before he felt the time was right.

Since then Abdullah has relied on the same continuity among trainers as from his stud personnel. The longest-serving is John Gosden, who has trained for him since the early 1980s, when Gosden was based in California. At that time Abdullah sent horses who came up narrowly short in Europe to the west coast, where Gosden enjoyed success with the likes of Grade 1 winners Bel Bolide and Alphabatim.

Gosden, who trains Enable, has been on the Juddmonte books for 35 years. That is only marginally longer than Andre Fabre, who trained all the progeny of Juddmonte’s supreme matriarch Hasili, among them Dansili and Banks Hill – the latter Abdullah’s first Breeders’ Cup winner in 2001.

A little window into Abdullah’s methodology opened up in 1987, when Gosden moved his training operation from California to Newmarket. Gosden’s replacement was chosen on entirely performance-related grounds. The nod went to Bobby Frankel on the evidence of reams of computer-generated data that highlighted Frankel’s prowess – albeit with horses of modest ability.

Frankel had never met his new patron before Juddmonte’s first batch of horses arrived in his stable. It was the start of an instantly fruitful relationship that saw Frankel unleash a flurry of Grade 1 winners on turf to go with dirt stalwarts such as Belmont Stakes winner Empire Maker.

Frankel continued to train while he battled with lymphoma, a form of blood cancer, although in later years he had passed on virtually all his horses except those he trained for Abdullah. The alliance between the two men was based on mutual respect, although Abdullah’s appreciation of Frankel’s training prowess was such that, when Frankel died in 2009, he named his best young racing prospect in the trainer’s memory. It was an act of providence fully deserving of what the fates bequeathed.

As the world now knows, Frankel the racehorse was trained by Sir Henry Cecil. And in a shocking reprise, Cecil was to fight his own debilitating battle against cancer, which eventually claimed him in 2013.

Abdullah’s indirect prompting almost certainly helped to prolong Cecil’s life. With Frankel in his pomp, it was easy to forget that Abdullah had stood steadfastly behind the man whose magnificent career went into steep decline at the turn of the millennium.

And when Frankel emerged to remind the fickle of Cecil’s unique talent, Abdullah kept the horse in training – and Cecil’s flame of hope flickering – as a four-year-old. The decision overrode the Juddmonte precedent of retiring their very best colts at three.

So what of Abdullah’s own legacy? It’s a question that has preoccupied the chattering classes for some years now – and no wonder. Juddmonte is the prize diamond among thoroughbred nurseries worldwide. Although it proved unfounded, the suggestion three years ago that it might be for sale sparked frenzied speculation that took forever to abate. It was as if the Louvre had put its entire art collection up for auction.

Such speculation is abetted by the fact that there is no obvious heir to Juddmonte among Abdullah’s sons, although two of them – Prince Ahmad bin Khalid and Prince Saud bin Khalid – are occasional visitors to the races when one of their father’s best horses steps out. Each of them was on hand to witness Enable win last season: Prince Ahmad for the King George VI and Queen Elizabeth Stakes and Prince Saud for the Arc at Chantilly.

Abdullah himself has visited Longchamp more than once since it reopened in April, which lends encouragement that he may be on hand for Enable’s repeat Arc bid on Sunday. Beyond that, however, the only thing certain, in time-honoured Juddmonte fashion, is that the eventuality will have been planned for.

Although not reclusive, Abdullah does not care for the media spotlight. Much of his modus operandi has been pieced together from decades of turf involvement, over which time distinct patterns have emerged.

This sometimes leads to assumptions being made, yet there can be little doubt as to why Cecil, who meant as much to Abdullah as anybody in racing, has not had a Juddmonte homebred named in his honour – as Bobby Frankel had before him.

The answer can almost certainly be traced to Abdullah's discerning character. He knows well that the best-laid plans in racing often come to nothing, that an element of good fortune is obligatory, and that the success of Frankel the racehorse was probably propelled by divine velocity. He is also wise to the perils of tempting fate for a second time.

FIRST PUBLISHED 7:00AM, JAN 2 2019
Everyone who works for Juddmonte works for one man ? Prince Khalid ? not the company