Enable Races On SUPERSTAR TO RETURN

She'll be back! Enable to race on in 2020 with a third Arc victory the aim 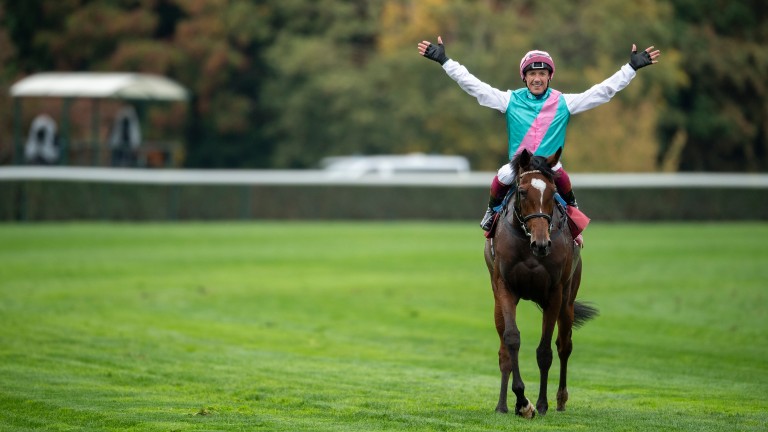 Superstar mare Enable will get the chance to right her heartbreaking defeat in the Qatar Prix de l'Arc de Triomphe after owner Khalid Abdullah gave the green light for her to remain in training as a six-year-old in 2020.

Trained by John Gosden, Enable, who won the Oaks in 2017 and also has a brace of King George VI and Queen Elizabeth Stakes on her CV, was last seen finishing second when bidding for an unprecedented third Arc this month.

"She has come out of the Prix de l'Arc de Triomphe in good form and will not race again this year," said Abdullah's long-serving racing manager Teddy Grimthorpe.

"Her racing programme will be determined entirely by her wellbeing, so no racing plans will be announced at this stage. The Prix de l'Arc de Triomphe remains an important target."

Enable: all the rage for next year's Arc
Martin Lynch

Gosden was understandably thrilled, and added: "She's been in good order since the Arc and it's wonderful for her to be racing next year.

"It is a typically sporting and positive decision from Prince Khalid."

Also delighted was Frankie Dettori, Enable's big-race rider and one of her most vociferous cheerleaders.

He tweeted his support at the news, saying: "My girl is staying in training for next year. I can't wait. Come on Enable."

William Hill reacted by making the popular champion 10-1 for next year's Arc but were soon forced to take action, clipping her to 7-1 within 18 minutes of their initial offer.

"What a following this horse has – I cannot remember the last time we racked up a six-figure liability in under 20 minutes," said Hills spokesman Rupert Adams.

My girl is staying in training for next year. I can’t wait. Come on Enablepic.twitter.com/IoQ2bQ10Vy

"It's a huge boost to the sport of Flat racing that Enable will stay in training for a fifth season, and having lost very little in defeat in this year's Arc she is just 6-1 to complete the treble in 12 months, and half those odds to repeat this summer's brilliant Coral-Eclipse victory," said Coral's David Stevens.

Ladbrokes went 5-1 for the Arc and 10-1 the mare is unbeaten next year, although she must run at least twice.

A Juddmonte homebred, Enable made a successful debut on the all-weather at Newcastle in November 2016, but was beaten on her first start of the following year.

However, she then went on a 12-race rampage, compiling one of the most decorated lists of achievements in thoroughbred history.

It includes the Oaks and Irish Oaks in 2017, followed by a stunning first King George triumph and then an easy win in the Yorkshire Oaks before her first Arc at Chantilly.

Enable's four-year-old campaign last term was held up by a spring setback, but she roared back in the autumn capturing the Arc again and making history by recording a Breeders' Cup Turf success the following month.

Blessed with a rock-solid temperament and huge engine, she had been flawless in 2019, winning the Eclipse, another King George and Yorkshire Oaks before her date with destiny at Longchamp this month.

Bidding to become the first horse to win three Arcs, Enable went off the 1-2 favourite under her biggest admirer Dettori and looked to set to seal her place among racing's immortals only for old rival Waldgeist to swoop late and deny the ending so many wanted.

A deflated Dettori was crestfallen and her team had kept their cards close to their chest in regard to her future since, but Abdullah – the widely respected owner who kept dual world champion colt Frankel in training at four – delivered another gift to the sport with Tuesday's welcome news.