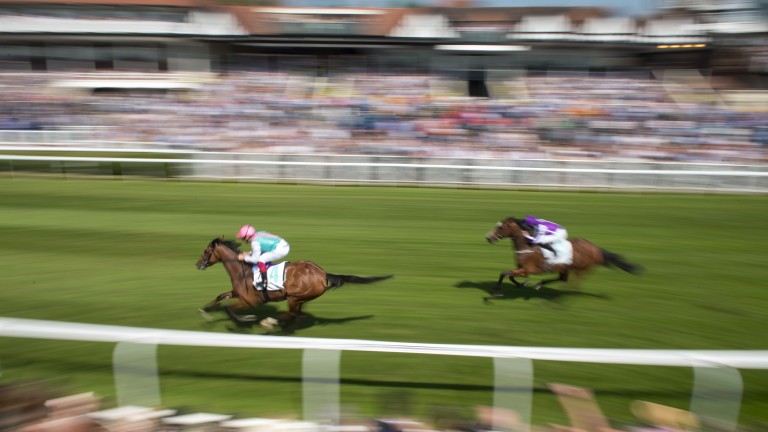 Forget 'Frankel fever'. Perhaps bloodstock experts should have been focusing on 'Nathaniel neurosis' all along.

The King George VI and Queen Elizabeth Stakes winner came within half a length of beating the horse of the century on their debut at Newmarket in 2010 and chased him home in third place in the Champion Stakes at Ascot two years later.

But he could just make it third time lucky by beating his old rival in the race to be the first to sire a Classic winner, thanks to his daughter Enable.

The filly, home bred by Khalid Abdullah in Nathaniel's first season at stud, scored an impressive victory by a length and three-quarters and nine in the Arkle Finance Cheshire Oaks, showing a smart turn of speed under Frankie Dettori.

And the filly trained, like Nathaniel, by John Gosden in Newmarket is now a best-priced 10-1 for the Investec Oaks at Epsom, for which her owner's Shutter Speed – who beat her at Newbury last month –goes on trial in next week's Musidora Stakes at York.

"For a stayer she showed a good turn of foot," said Dettori. "I thought I was on a good stayer so had better kick first, and she quickened well."

Abdullah's racing manager Teddy Grimthorpe added: "She handled the track well. She is quite a lengthy filly but that's the beauty of coming to these sort of races, they are educational both for the horse and for the connections!"

A Classic bid is certainly on the cards, and he said: "The way she travels you'd be pretty confident she'd find a mile and a half to her liking."

He continued: "Distance is going to be an issue with Shutter Speed. I'm pretty confident Enable will stay a mile and a half but there is a question mark about Shutter Speed on her pedigree, which is why she is going to York, so she will have the option of the Prix de Diane as well.

"How lucky are we to have these sort of choices? It's a happy position to be in."

"She will improve an awful lot. An Oaks, whether that is Epsom or the Curragh, is well within her compass."

Shutter Speed gears up for York mission on the Newmarket gallops

FIRST PUBLISHED 2:40PM, MAY 10 2017
The way she travels, you'd be pretty confident she'd find a mile and a half to her liking