Elliott: The Storyteller has good chance to get off mark for the season 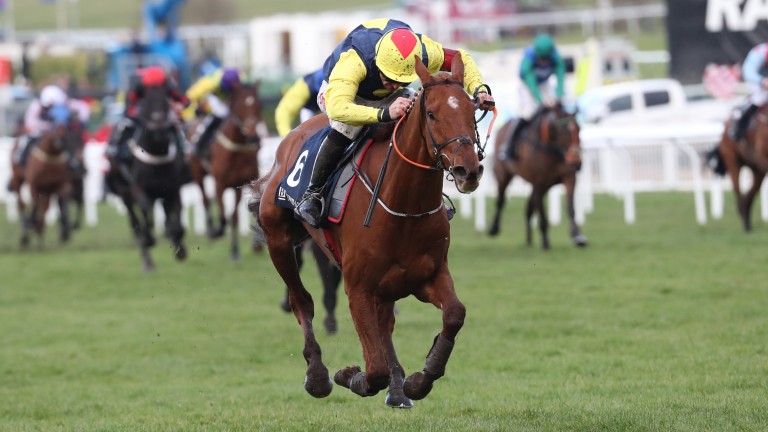 The Storyteller: Gordon Elliott's eight-year-olds bids for his first success of the season in Grade 2 chase at Fairyhouse
John Grossick (racingpost.com/photos)
1 of 1
By Tony O'Hehir UPDATED 7:01PM, APR 21 2019

The Storyteller will be attempting to regain the winning thread when he faces five rivals in the second running of this Grade 2.

Last season the Gordon Elliott-trained eight-year-old landed the Plate at the Cheltenham Festival and a Grade 1 novice contest at Punchestown.

The Storyteller is winless in five starts this season and was pulled up in the Ryanair Chase at Cheltenham last month, but before that he had put in a series of decent performances, including finishing third behind Bellshill in the Irish Gold Cup and a ten-length sixth to Aintree winner Kemboy in the Savills Chase at Leopardstown.

Elliott, who is also represented by Doctor Phoenix, is optimistic The Storyteller can get off the mark for the season. He said: "The Storyteller is in good form, should like the ground and looks to have a very good chance."

He added: "Doctor Phoenix was disputing the lead when he fell at the second-last in this race last year. He's well but would much prefer slower ground."

Snow Falcon, winner of the Kerry National at Listowel in September, makes his first appearance since landing a Grade 2 chase at Down Royal in November.

His trainer Noel Meade said: "He had a stretch crack to a hind leg and that's why he's been off for so long. I'd imagine he's going to need the run."

Although he has won only once in 15 attempts over fences, Ordinary World has been placed several times in smart company and the Henry de Bromhead-trained nine-year-old comes out best at the weights on official figures.

Crosshue Boy, who stumbled and fell after the seventh fence in the Scottish Grand National at Ayr when well fancied, and Jessica Harrington's Jett complete the line-up.

FIRST PUBLISHED 6:00PM, APR 21 2019
Doctor Phoenix was disputing the lead when he fell at the second-last in this race last year