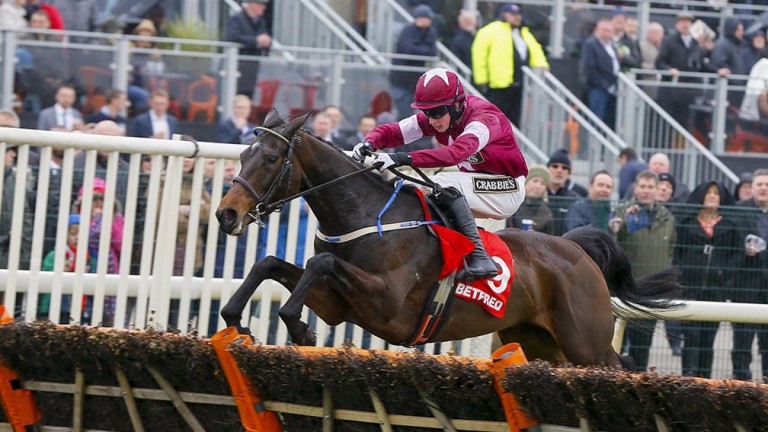 Apple's Jade: had to settle for second behind Rashaan in the Grade 2 WKD Hurdle at Down Royal
Mark Cranham
1 of 1
By David Jennings 9:16AM, NOV 8 2016

The OLBG Mares' Hurdle is emerging as the long-term aim for Apple's Jade after Gordon Elliott revealed he is keen to step her up in trip and keep her against her own sex.

Apple's Jade was last season's outstanding juvenile, winning Grade 1s at Aintree and Punchestown by wide margins, but she made a tame debut for Elliott in the WKD Hurdle at Down Royal on Friday and a Champion Hurdle challenge now looks increasingly unlikely.

“I will have to have a chat with the lads [Gigginstown] about her before deciding anything but I wouldn't be surprised if we stepped her up in trip and kept her against her own sex,” Elliott said.

He added: “Maybe we should be questioning the juvenile form of last year after the way Ivanovich Gorbatov ran at Naas on Sunday. They might not have been the best bunch. I was disappointed after Apple's Jade but we need to step her up in trip. If the ground came up soft we might have a think about the Hatton's Grace at Fairyhouse early next month but I'd be keen for her to stick to her own sex.”

Apple's Jade is a standout 11-2 with Paddy Power for the OLBG Mares' Hurdle but is as short as 3-1 with Coral and Ladbrokes. She is a top price 16-1 for the Champion Hurdle having started last Friday a general 8-1 shot.

Don Poli was an even bigger disappointment at Down Royal but Elliott was not too downbeat after his lethargic showing.

He said: “I was a bit more deflated about Apple's Jade than I was about Don Poli. I'm not sure you can trust Don Poli as he has had a lot of hard races in big staying chases before coming to us so I suppose he will kick the towel in some of the time. I'm not going to lose too much sleep over it. Both he and Apple's Jade have come out of their races fine.”

FIRST PUBLISHED 3:19PM, NOV 7 2016
I will have to have a chat with the lads [Gigginstown] about her before deciding anything but I wouldn't be surprised if we stepped her up in trip and kept her against her own sex