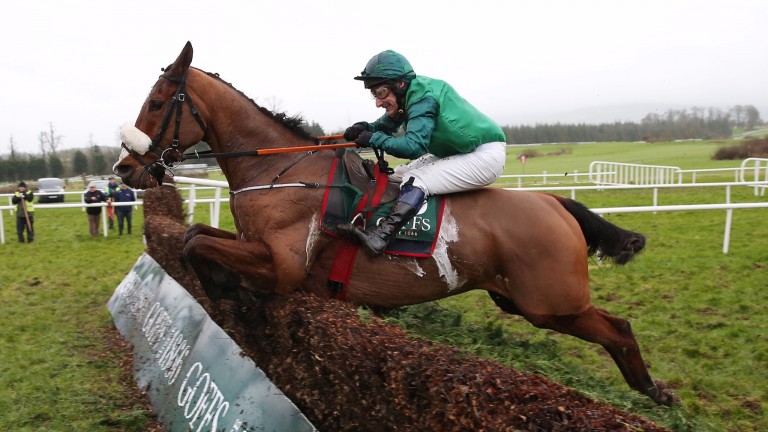 Ucello Conti: on the same mark as when finishing sixth last year
CAROLINE NORRIS
1 of 1
By Brian Sheerin 4:47PM, NOV 27 2016

Ucello Conti will bid to keep the Gordon Elliott ball bouncing in the Betfred Becher Chase at Aintree on Saturday.

The Simon Munir and Isaac Souede-owned horse had a pipe-opener over hurdles in the Grade 2 Lismullen Hurdle this month, and red-hot trainer Elliott said on Sunday it was all systems go for Aintree.

"He's in great form and we're definitely running him in the Becher," said Elliott.

"I think he ran a great race in the Aintree National last season when he got round to finish sixth behind Rule The World. That will be the plan for him again this year."

Ucello Conti, a 14-1 chance with Betfred, may not be the only Irish representative in Saturday's feature at Aintree, as Jim Dreaper plans on running Sizing Coal providing the ground is suitable.

The eight-year-old was placed in the 2015 Irish Grand National and recently returned to winning ways at Sligo, but Dreaper is hoping the Becher could provide a stepping-stone to the Grand National for the Alan and Ann Potts-owned chaser.

"He's an intended runner but we don't want good or quick ground, so our plan may change if the ground doesn't suit," said Dreaper.

"We'd like to see how he handles those fences and hopefully he'll become a National horse in time."

No decision has been made regarding Ireland's big guns at the top of the Betfair Tingle Creek betting, Un De Sceaux and Douvan, but one who will not be going to Sandown on Saturday is Special Tiara, who has been ruled out by trainer Henry de Bromhead.

Fox Norton was an earlier scratch from the Tingle Creek, the Colin Tizzard-trained improver having suffered a setback since his win at the Cheltenham Open Meeting.

Tizzard gave an update on Fox Norton, saying: "The cut on his front leg has been treated and thankfully it stopped short of his tendon, but only just.

"He's trotted up sound and could have been ridden this week but we'll give him another week. We could have one run before the festival in the spring."

FIRST PUBLISHED 4:47PM, NOV 27 2016
He's in great form and we're definitely running him in the Becher next week