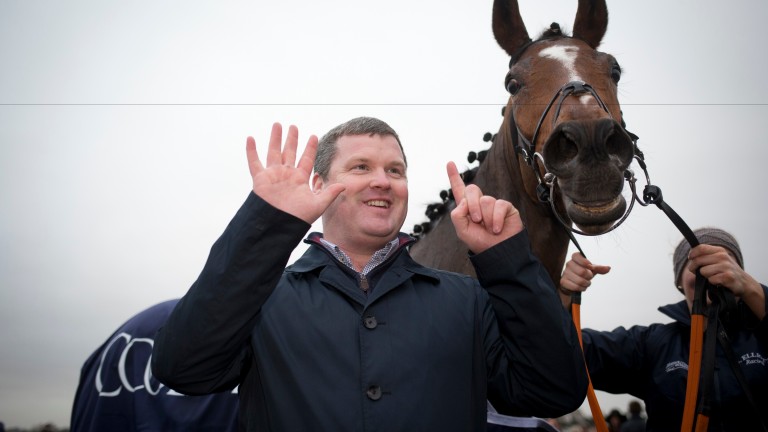 He might have settled for winning the Troytown Chase for a third year on the spin, but the big race at Navan on Sunday was just one of a super six winners for Gordon Elliott.

Elliott's half dozen, from seven races on offer, came at cumulative odds of 41,276-1, with Troytown winner Empire Of Dirt providing the highlight on a magical day for the County Meath maestro.

Elliott said: "It's been a brilliant and unbelievable day. We've had seven winners before on one day, split between Bellewstown and Perth, but we've never had six on the same card.

"I'm just lucky to have such a good team of horses and great staff, and to have a day like this at my home track is fantastic. We knew we had plenty of good chances coming here today, but to have six winners is something else."

It certainly is, and while plenty of trainers have landed five on one card in Ireland, including Willie Mullins, Dermot Weld, Aidan O'Brien and Jim Bolger, it is thought Elliott is the first to saddle six.

In Britain only one trainer has won six races on a single card - Paul Nicholls at Wincanton on January 21, 2006.

Mullins - the only other winning trainer at Navan on Sunday - is still favourite to successfully defend the trainers' title, at 1-2 with Paddy Power, but Elliott was on Sunday night just 6-4 with the same firm, and no bigger than 7-4 with Sky Bet.

And it is Elliott who is setting the pace off the back of a fantastic campaign, during which he has already enjoyed 136 winners in Ireland and Britain, with 114 his domestic score.

That figure for Elliott is close to a personal best, with five months of the season still to go, but how does Elliott himself rate his prospects?

"I haven't a hope in hell of winning the title," he claimed, somewhat categorically.

Elliott saddled 11 in the Troytown and had 25 runners in total on the card.

While Empire Of Dirt has the Randox Health Grand National as his big aim, Grade 3 Monksfield Novice Hurdle winner Death Duty could be on the path to the Cheltenham Festival.

Elliott said after his seven-and-a-half-length success: "He's a real chasing type but fences will be next season. He got the two and a half miles here well and will have no problem going up in distance. We'll see how things go but he could be one for the Albert Bartlett."

Death Duty was made the new favourite for the Albert Bartlett by some firms, with 12-1 being the best price on offer.

Brelade's victory in the opening 2m maiden hurdle was Kennedy's first since returning from injury, while Elliott was especially pleased with Jury Duty's triumph in the 2m6½f handicap hurdle, saying: "I'm delighted for his owners, the Sideways Syndicate, they're a group of lads from around my home area and it's great for them."

The 2m handicap hurdle was an Elliott benefit, with Bull Ride just lasting home from stablemate Dawerann. That pair were separated by a nose on a day their trainer was a distance clear of the field.

One William Hill punter in Wigan managed to find all six Gordon Elliott winners, to pick up more than £10,000 for a £3.15 outlay.

"He took some early prices, combined with best-odds guaranteed, so the six delivered at odds of 73,709-1 - a huge enhancement from the 41,276-1 he would have got at Starting Price," said Hills' spokesman Jon Ivan-Duke.

FIRST PUBLISHED 3:56PM, NOV 27 2016
I'm just lucky to have such a good team of horses and great staff, and to have a day like this at my home track is fantastic