Talk of the Tracks NAAS

Elliott lands a treble to continue fine run of form 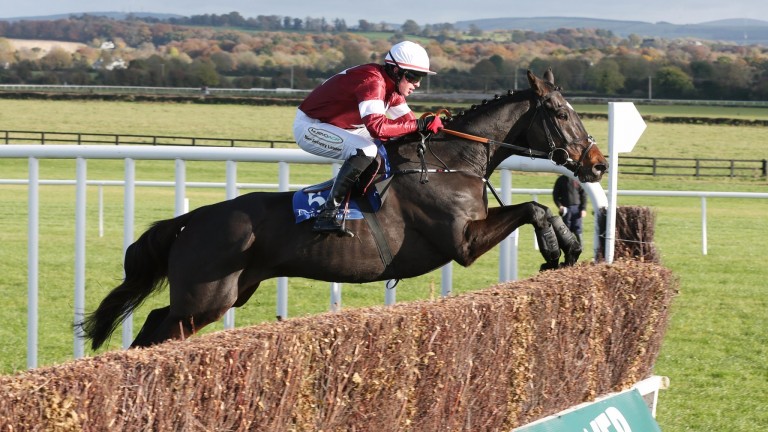 Gordon Elliott's relentless run of success continued when a treble at Naas and a double at Cork brought his tally for three days to 11 winners following six victories at Down Royal's fixtures on Friday and Saturday.

Tell Us More, having his second run for the trainer, set the ball rolling here when landing the Grade 3 Poplar Square Chase over two miles, after which the Willie Mullins-trained Avant Tout, who was having a prep run for the Hennessy Gold Cup, had to be put down after suffering a tendon injury on landing over the first fence.

Formerly trained by Mullins, Tell Us More, ridden by the in-form Keith Donoghue, scored by four and a quarter lengths despite jumping to the left at most of the fences.

"He's had plenty of problems but has plenty of ability," Elliott said of Gigginstown's seven-year-old. "We might tun him in the Fortria Chase at Navan next Sunday."

De Plotting Shed followed up for Elliott when completing a hat-trick of hurdle wins with an all-the-way success under 7lb claimer Cian Collins in the 2m4f conditions hurdle, in which Triumph Hurdle winner Ivanovich Gorbatov finished a remote third.

"He's a grand honest horse who jumps and stays really well," Elliott said of the eight-length winner. "We'll be running him in races from two and a half miles upwards."

Brelade, who completed Elliott's treble when making all under Jamie Codd in the bumper, will make his hurdling debut in the coming weeks.

Attribution to be upped in class

It was also a big weekend for Henry de Bromhead, who landed the Grade 1 JNwine.com Champion Chase with Valseur Lido and a Grade 2 chase with Sub Lieutenant at Down Royal on Saturday and was on the mark here in the 2m beginners’ chase when Attribution scored under Barry Geraghty.

The Klairon Davis Chase at Navan is the next likely target for the six-year-old.

De Bromhead said: "Barry gave him a super ride. He jumped a bit deliberately but is learning and won well.”

Tom Mullins is another trainer in form and following three winners at Galway the previous weekend he took the Paddy Osborne Memorial Brown Lad Handicap Hurdle with the Mark Walsh-ridden Sir Scorpion, and the 2m handicap hurdle with Llancillo Lord, who scored under Paul Townend.

Mullins said: "Sir Scorpion summered very well and is a lot stronger now compared to last season. He seems to handle all types of ground.

"Llancillo Lord is improving and the good ground helped him. He'll make a chaser but we'll give him another run over hurdles before the ground changes."

The Andy Lynch-trained Ben Dundee ran out a seven-length winner of the 2m maiden hurdle, setting up a double for jockey Donoghue.

Lynch said of the Chris Jones-owned winner: "He's a good one and should improve a nice bit. He'd prefer softer ground than he had today. We haven't made a plan for him yet."

They say that when you're hot, you're hot and that certainly applies to Gordon Elliott, Henry de Bromhead and Tom Mullins.