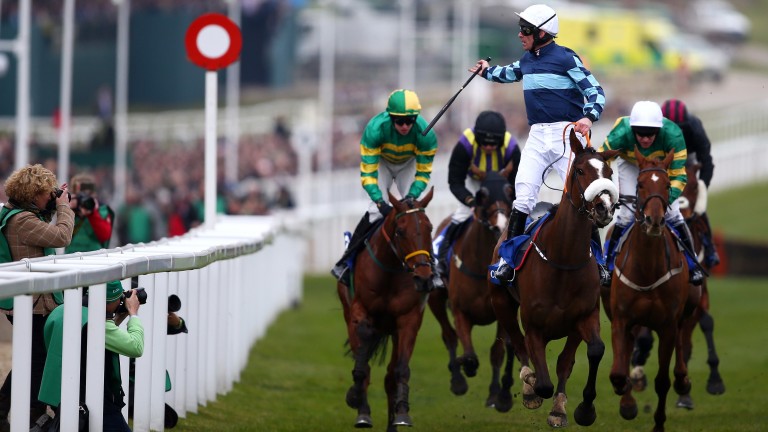 Diamond King took the Coral Cup at the Cheltenham Festival in March
Michael Steele
1 of 1
By David Jennings 6:00PM, DEC 3 2016

The two superpowers of Irish racing, Gordon Elliott and Willie Mullins, have shared the last four runnings of this between them, but with no Closutton representative in today's line-up, it is left to the current pacesetter to keep the domination going.

Elliott is seeking a fourth Drinmore triumph in just seven years after Jessies Dream (2010), Don Cossack (2013) and No More Heroes (2015) did the business and he launches a three-pronged attack on the race, including last season's Coral Cup winner Diamond King.

He made a seamless transition to chasing at Galway in October when barely touching a twig en route to a 14-length victory and Elliott says he has had this race on his agenda ever since.

A Toi Phil has looked the part over fences so far and it was hard to pick holes in his latest Grade 2 success at Punchestown, albeit our viewing was badly affected by the dense fog.

Tony Martin has never hidden his admiration for Anibale Fly and he comes into the race on the back of a beginners chase win at Navan, the form of which was franked by Martello Tower at Fairyhouse on Saturday.

Road To Respect might be the least high-profile of the Gigginstown contingent but he burst a few bubbles at Naas and it would not be the biggest surprise if he did so again.

This has been a punter-friendly race since 2007 with four winning favourites. Indeed the biggest priced winners in that time were Jessies Dream (2010) and Valseur Lido (2014) at 7-2.

Gordon Elliott, trainer of A Toi Phil, Diamond King and Lieutenant Colonel
A Toi Phil is in good form and he will like the ground. He was good at Punchestown and I just think the bit of better ground today will suit him better again. Diamond King will love the ground as well and we have trained him for this race. I am very happy with him and think he has a big chance. Lieutenant Colonel is our other runner and he was disappointing the last day, but it's worth remembering that he's a dual Grade 1 winner over hurdles.

Mouse Morris, trainer of Alpha Des Obeaux
Hopefully if he's sound he'll run at Fairyhouse. It's over two and a half but he wants three miles. He's been adequate over fences so far but the form is working out okay. I was surprised to see him made favourite for the RSA after Cork but they are probably sticking it on his Cheltenham run [in the World Hurdle].

Tony Martin, trainer of Anibale Fly
He won his beginners chase well and this was the obvious step for him. He might prefer it a bit softer but the ground is the same for them all. It's too early to say how good we think he might be but, strictly on hurdles form, some of these were rated much higher than him. Having said that, I think he can turn into a nice chaser.

Eddie Harty, trainer Coney Island
He's in great form and I was very pleased with his first run behind Haymount at Punchestown. It's a big step up in grade but I think it's worth a shot for him. The ground should be fine for him.

Noel Meade, trainer of Road To Respect
He won his novice chase well at Naas and he has been in great form since that win. He has just been working really well. We thought we would give him a shot at this. We have liked everything we have seen from him so far and he has been doing things right. Whether or not he is up to this class, we will find out, but I think this could be his trip. Maybe it's backwards in trip he needs to be going rather than further.

FIRST PUBLISHED 6:00PM, DEC 3 2016
Diamond King will love the ground and we have trained him for this