Elliott cut to evens for title after Navan four-timer 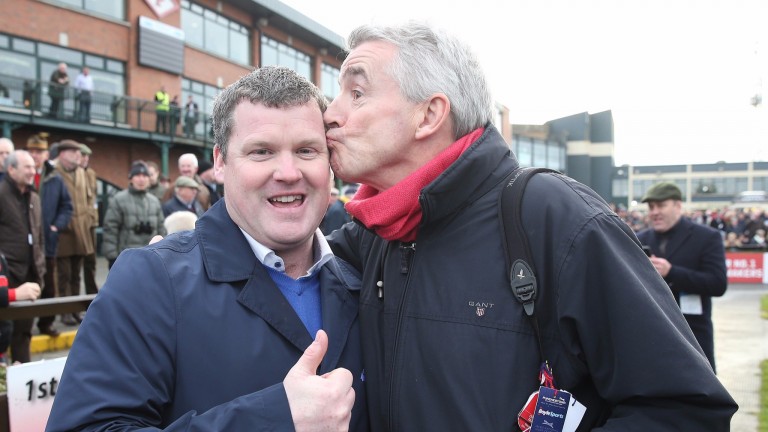 Gordon Elliott: gets a kiss off Michael O'Leary after Apple's Jade won the Hatton's Grace Hurdle at Fairyhouse
CAROLINE NORRIS
1 of 1
By David Jennings 9:51AM, DEC 19 2016

Paddy Power eased Willie Mullins to 8-11 (from 4-6) and shortened Gordon Elliott into evens (from 11-10) for the Irish trainers' championship following Elliott's 73-1 four-timer at Navan on Sunday.

Those four winners, including Death Duty who picked up €25,075 for winning the Grade 2 Navan Novice Hurdle, increased Elliott's lead over Mullins to €461,475.

The title rivals have taken it in turns to steal the show over the last few Sundays. The current pacesetter sent out six of the seven winners at Navan's previous fixture on the last Sunday in November, while the defending champion celebrated six winners at Punchestown and Cork last Sunday.

The scene is set for a fascinating battle between the pair at Leopardstown and Limerick over the festive period and Mullins appears to have the stronger team for the Grade 1s with Min, Djakadam, Faugheen and Nichols Canyon all possibles at this stage.

FIRST PUBLISHED 6:06PM, DEC 18 2016
The scene is set for a fascinating battle between the pair at Leopardstown and Limerick over the festive period