Ellie proves too hot to handle for the US racing authorities 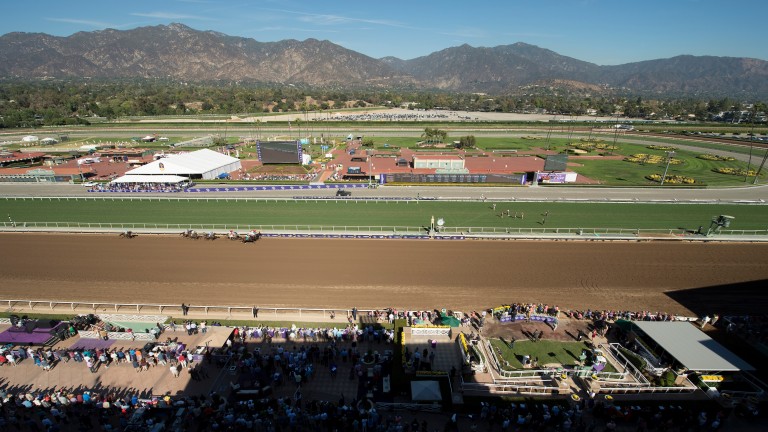 It's not only the new president who is cracking down in the US at the moment, as Santa Anita racegoers have discovered.

The Jockey Club has taken the highly unusual step of forcing connections of a three-year-old California-bred filly to change her name after her debut, seemingly because it was offensive.

So Ellie Von Shtupp, who finished last at Santa Anita last month, was Ellie Mae when she trailed home ninth of ten there on Saturday.

The filly was apparently named after a character in the film Blazing Saddles, a German seductress played by Madeline Kahn whose performance earned an Academy Award nomination.

But 'Shtupp' is a vulgar word in the Yiddish language and after receiving a complaint the authorities stepped in to ask owner-breeder Terry Lovingier to make a change.

Jockey Club registrar Rick Bailey told the Paulick Report: "We made the decision that the original name was approved in error. The owner agreed to change the name and Ellie Mae was approved as the new name."

In Britain, BHA rules outlaw the registration of any name that the authority considers to be "suggestive or has a vulgar, obscene or insulting meaning", is "in poor taste", "may be offensive to religious, political or ethnic groups' or 'may otherwise cause offence".

But it is not easy to keep on top of the vagaries of an evolving language and the occasional rude word or phrase can slip through, as was the case with these horses. . .

The name of this very useful sprinter of the early-1990s may have been a fair description of his trainer's state of mind when he was disqualified from first at Ayr in 1992.

The naming of Dominic French Davis' dual seven-furlong winner may have been slightly saucy but it was also a perfect reflection of her breeding as she was by Pursuit Of Love out of My Discovery.

Julie Cecil's Listed winner appears innocent enough . . . until you apply Dr Spooner's affliction and transpose the letters of her name.

A commentator's nightmare, as saying her name quickly could only sound rude.

Who Gives A Donald

No reference to President Trump, as this two-year-old was racing in 1989, when he would have raised the eyebrow of anyone familiar with Cockney rhyming slang.

FIRST PUBLISHED 2:04PM, FEB 5 2017
We made the decision that the original name was approved in error. The owner agreed to change the name and Ellie Mae was approved as the new name