Eli can write her name in the history books 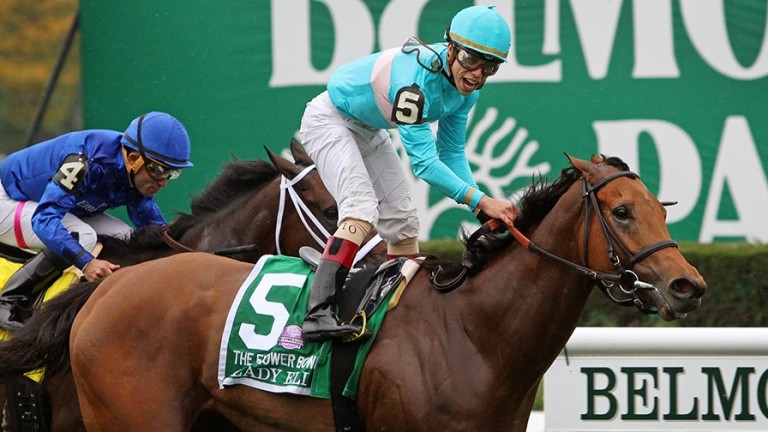 Lady Eli has already completed a miracle return to racing after overcoming a life-or-death battle with laminitis and returning to racing to win the Grade 1 Flower Bowl Stakes last month.

Undefeated in six starts before stepping on a nail and beginning her fight for life, she heads the market for trainer Chad Brown, who has won this race three times in four years.

The only trainer to interrupt that sequence was Sir Michael Stoute, who won with Dank in 2013 and returns with Queen's Trust. She has endured some bad luck in running during a winless 2016, but a length and a quarter defeat at the hands of Minding in the Nassau gives her solid claims in this company.

Aidan O'Brien saddles Europe's leading hope Seventh Heaven. She beat Found by almost three lengths in the Yorkshire Oaks and had excuses when only fifth in the Filly & Mare on Champions Day.

O'Brien also saddles Pretty Perfect, who finished one place ahead of her stablemate at Ascot. She likes to front-run but will have competition from Catch A Glimpse, last year's Breeders' Cup Juvenile Turf winner whose eight-race winning streak ended two starts back and who beat only one home on her most recent outing.

Japanese raider Nuovo Record has not won since March 2015 but has some solid form, including a Japanese Oaks win and close second to A Shin Hikari in last year's Hong Kong Cup.

Chad Brown, trainer of Sea Calisi and Lady Eli
It's very rare what Lady Eli did. It's already an incredible story, but it would have an incredible new chapter if she's able to win this. I think it would secure her place in history as one of the all-time greats. She's really doing terrific. Her last work was outstanding – she couldn't possibly have worked any better. I'm very excited about the way she's coming into the race. Sea Calisi is coming into the race equally as well.

Mark Casse, trainer of Catch A Glimpse
We felt like the last race was so bad it couldn't be true. We know she's much better than that. She's trained well – as good as she's ever trained. Our feeling is she'll really like this turf course. We'll give it a shot, though we know it's a tall task. If she brings her A-game she'll be tough to beat.

Aidan O'Brien, trainer of Seventh Heaven and Pretty Perfect
We're very happy with Seventh Heaven. She loves fast ground and the flat track will suit her well too. Ascot was a little messy and it maybe just didn't work out well for her. She's in good order. We know she stays a mile and a half well but you hope she'll be alright for a mile and quarter. Pretty Perfect is a grand, solid filly and if she gets left alone in front that's when she runs her best race – that would be perfect.

Mike Maker, trainer of Al's Gal
Al's Gal is great. She's a little iron horse and has really held her weight well from Woodbine to here, and actually looks a little heavier. She's tough and really doesn't surprise me any more.

Mike Stidham, trainer of Zipessa
It's to our advantage to have run well already on the course. We'll break and see how it's setting up, but she does have speed and we'd love to be in the controlling spot early if Catch A Glimpse isn't there already.

Sir Michael Stoute, trainer of Queen's Trust
Queen's Trust has been unlucky all year so hopefully she gets the rub of the green this time.

FIRST PUBLISHED 6:00PM, NOV 4 2016
It's already an incredible story, but it would have an incredible new chapter if she's able to win this