Talk of the Tracks GREATWOOD HURDLE 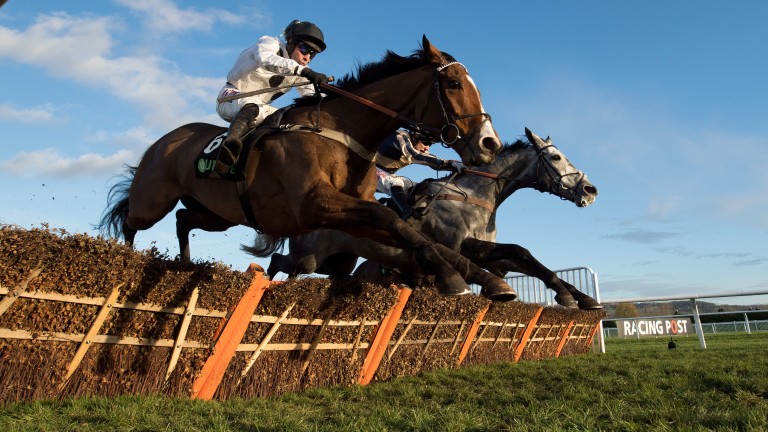 Elgin (left) takes the final flight with Misterton in a thrilling finish to the Greatwood Hurdle
Edward Whitaker (racingpost.com/photos)
1 of 1
By Stuart Riley UPDATED 4:18PM, NOV 20 2017

A winner at Cheltenham can make up for a lot.

Over the three days of the November meeting one of the sport's powerhouse operations – Alan King's Barbury Castle-based yard – ran horses in just one race. That race was the Unibet Greatwood Handicap Hurdle, a Grade 3 worth £100,000, and they walked away with the trophy thanks to Elgin, who is in equal parts tenacious and rapidly improving.

Wayne Hutchinson felt he had a "torrid run round on the outside", but it was exactly the place to be according to clerk of the course Simon Claisse after Saturday's unforecast deluge – just the third rainfall that has arrived unpredicted in Claisse's 18 years in charge – and so it proved as Elgin travelled best into the race and then battled every yard up the famous hill finish to get the better of pacesetter and unluckiest-of-losers Misterton. There was just a neck in it at the line.

Misterton, who was 1lb out of the handicap, battled on oh-so- gamely,  while Old Guard was third with The New One a commendable fourth under his big weight.

It has been a frustrating few months for King. Despite winning the Old Roan with the evergreen Smad Place and a Listed handicap at Ascot just 15 days ago with the Elite Racing Club's made-of-teak Elgin, he has endured more than his fair share of near-misses.

Since the start of October he has saddled nine winners. Not bad, but he has stood in front of the post-race collection point marked '2' on 22 occasions and the adjoining lot marked '3' on a further 20.

A delighted King said: "How many seconds have I had? They've been running really well but it's nice to convert. It's nice to come racing for a day, they [he also saddled the fifth William H Bonney] were our first runners of the week here.

"We've been lucky and won three good pots, but there's nothing like a winner here.

"The winner could go to Ascot just before Christmas for the Ascot Handicap [formerly The Ladbroke], I think it's called now.

"He just keeps improving. I was worried about the ground for him but we've probably found the best of it. Wayne's given the outside to no-one and the horse has done very well for his summer. I was going to run him on the Flat but we thought he probably wanted a break as he'd been on the go a long time."

Such is the 'normal racing fans' nature of the Elite Racing membership that their first question upon being congratulated by the press was as to the fate of the faller at the second-last, the 9-2 favourite London Prize. Sadly, it was the worst possible news as the injury sustained proved fatal.

"It's a huge lose, for his owner Margaret Forsyth, all the staff, myself and Tom O'Brien," said a reeling trainer Ian Williams, who in the last few weeks had saddled the six-year-old to finish second in the Cesarewitch and then win the Grade 2 Elite Hurdle at Wincanton.

"It's always sad to lose any horse, especially to a non-serious fracture, but we can't repair horses like we can ourselves. It's such a shame to lose anyone, but one on the way up the ladder like he was, with his CV, is devastating for everyone involved."

FIRST PUBLISHED 3:14PM, NOV 19 2017
I had a torrid run round on the outside but he was very honest and kept coming good for me and stuck his neck out