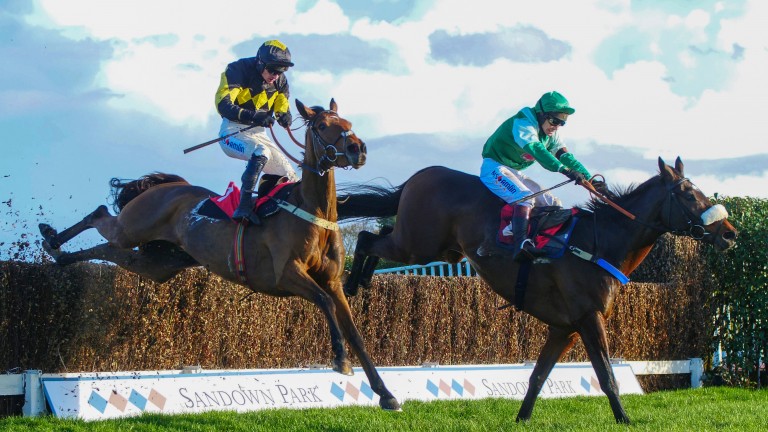 Thomas Patrick (far side) and Elegant Escape tackle the last in the Future Stars Chase
Mark Cranham
1 of 1
By Lewis Porteous 6:18PM, NOV 13 2018

Some trainers are looking for speed, others exuberance, but it is die-hard staying chasers that the Tizzards set out to find and Elegant Escape showed all the requisite stamina and courage as he kicked off his season with a stoic victory in a small but select 188Bet Future Stars Intermediate Chase.

All four runners held entries for the Ladbrokes Trophy on December 1 and Elegant Escape did enough to climb to the top of the market for the prestigious Newbury chase as he clawed back plucky runner-up Thomas Patrick from the back of the last for a hard-earned half-length success.

A best price 8-1 (from 10) with Betfred and Totesport, Elegant Escape usurped Terrefort at the head of the Ladbrokes betting, after the odds-on favourite put in a sketchy round of jumping to finish a distant last.

"Tom O’Brien didn’t fully go for him until after the last so it was the perfect comeback run," said assistant trainer Joe Tizzard. "He’s progressive and was always getting there and there’s nothing wrong with the second horse.

"He’s quite idle and was a little bit burly in the parade ring so we were desperate to get a run into him before Newbury."

The Tizzards landed the Ladbrokes Trophy in 2016 with subsequent Cheltenham Gold Cup hero Native River and the way Elegant Escape bowed his head for one last charge from the last fence was reminiscent of his star stablemate.

Tizzard added: "It’s all about the Ladbrokes Trophy with him but he’s not dissimilar to Native River and let’s hope he progresses and becomes a Gold Cup horse." 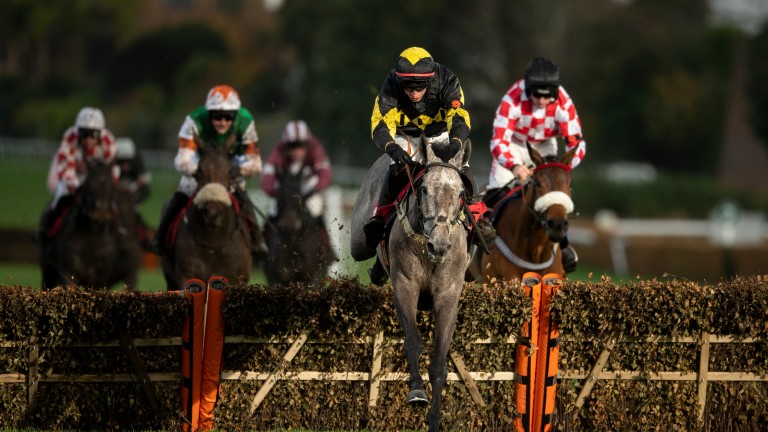 The winner carried the colours of John Romans, a big supporter of the Tizzard yard and enjoying the Sandown celebrations after Eldorado Allen initiated a double on the card. Team Tizzard celebrated an across-the-card five timer with a treble at Ffos Las too.

The disappointment of the race was undoubtedly Terrefort, whose jumping unravelled after a mistake at the 12th.

"He was going well for a circuit but it was very noticeable that he was carrying his tail very awkwardly, so I can’t believe there isn’t something in that department," said trainer Nicky Henderson. "I’m not going to say no to the Ladbrokes Trophy but clearly we’ll have to go and investigate."

The veterinary officer later found Terrefort to be sore behind.

Thomas Patrick, receiving 2lb from the winner, was carried out on his shield in second and will reoppose at Newbury.

Champion jockey Richard Johnson said: "I just hope they get lots of rain before Newbury. If he gets his ground I’d like to think he’ll have a massive chance."

William Hill agreed, making him 7-1 joint-favourite (from 16) with Elegant Escape, although 10-1 is widely available about Tom Lacey's stayer turning the tables.

FIRST PUBLISHED 6:58PM, NOV 11 2018
It?s all about the Ladbrokes Trophy with him but he?s not dissimilar to Native River and let?s hope he progresses and becomes a Gold Cup horse