Thursday Action RACE OF THE DAY

First run in 1938, the Rockingham is Ireland's richest five-furlong handicap and has been targeted by many British trainers over the years.

Thursday's 17-runner renewal features eight sprinters from across the Irish Sea as the visitors seek their first win in the race since Foxy Forever scored in 2015 when completing a hat-trick of wins for British stables.

El Astronaute, who heads the weights, is on his second trip to Ireland this month having landed a Listed event over the trip at Cork 13 days ago. 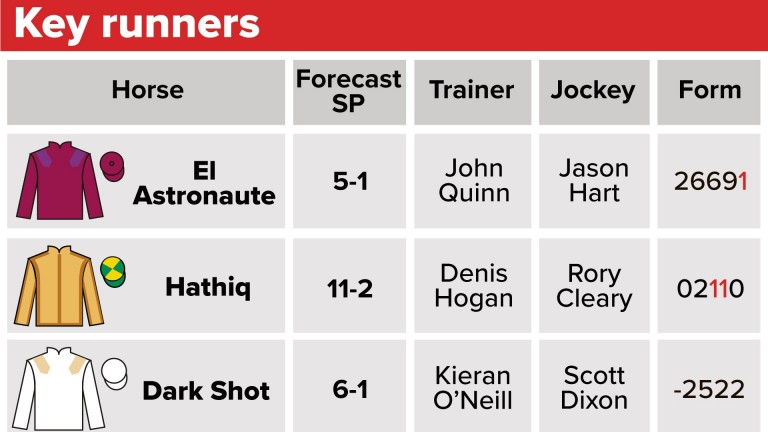 The John Quinn-trained six-year-old, who will be chasing a 12th win, is joined by stablemate Lord Riddiford.

Four of the runners – the British trio Dark Shot, Duke Of Firenze and Just Glamorous and the Denis Hogan-trained Hathiq – contested the Dash at Epsom early this month. Dark Shot, without a win in almost three years, finished a neck second after stumbling leaving the stalls, while Hathiq started favourite but disappointed in 17th.

Hathiq's rider Rory Cleary has won the race twice and successfully combined with Hogan two years ago when scoring on Tithonus.

Duke Of Firenze, who met trouble in running at Epsom and also encountered traffic problems in this event a year ago, ran second at Doncaster on his most recent start but history is against the ten-year-old and Maarek, two years his senior. No horse of double-digit age has ever won the race.

At the other end of the age scale, the Willie McCreery-trained filly Nitro Boost is the only three-year-old in the line-up. When Battle Of Jericho was successful 12 months ago he was the first of that age group to win the prize since 1999.

John Quinn, trainer of El Astronaute and Lord Riddiford
El Astronaute is in very good form and was a good winner of a Listed race at Cork last time. He's got top weight to carry but he's a horse you know is going to go out and run his race. Lord Riddiford won well at Chelmsford two starts ago and backed that up with another good run at the course. They both deserve their place in the race and I hope they dead-heat for first.

Denis Hogan, trainer of Hathiq
Epsom didn't work out for him at all. He didn't seem to handle the track and was in trouble early on. He's in good form – we think we have him 100 per cent – and he has won over the course and trip. The negative is that he's drawn one out in the middle of the track.

Willie McCreery, trainer of Nitro Boost
The more the ground dries out, the better her chance will be. She's in good order and has a good draw. Nathan [Crosse], who won on her over the course and trip last time, is claiming 7lb and that should help.

David Griffiths, trainer of Duke Of Firenze
He's in good form and ran well at Doncaster last time on ground that wouldn't have been ideal. He was unlucky in the Dash before that and I think he's still a seriously well-handicapped horse.

Joseph O'Brien, trainer of True Blue Moon
He had a nice run at Tipperary a few weeks ago on his first start of the season. We think he has come forward and we're hoping for a good run in a very competitive race.

Grace Harris, trainer of Just Glamorous
I'm really happy with him and he ran well at Windsor last time. He wasn't beaten far in the Dash when the ground was too firm. I’m really pleased Seamie Heffernan is riding as I think he’ll suit him down to the ground.

Stopwatches at the ready! Tom Collins casts his expert eye over the Epsom Dash Veterans' races for sprinters could become a real crowd-pleaser Duke Of Firenze: a white knuckle-ride with plenty of dash