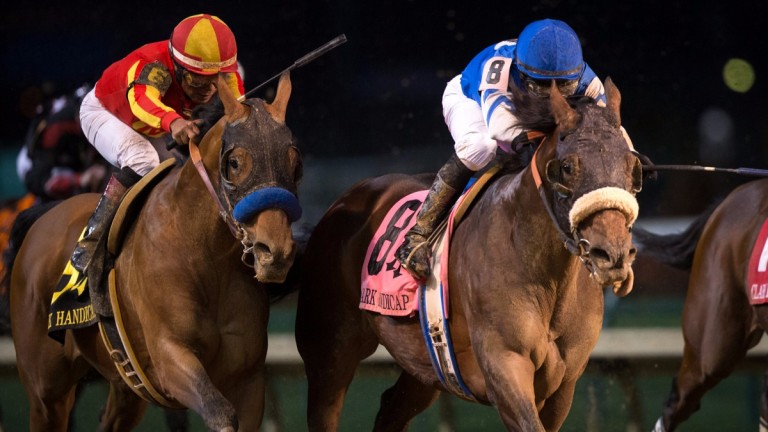 Effinex (right) beats Hoppertunity to win last year's edition of the Clark Handicap at Churchill Downs, where the pair clash again for the 2016 running on Friday
Wendy Wooley/EquiSport Photos
1 of 1
By Nicholas Godfrey 6:00PM, NOV 24 2016

Last year’s one-two Effinex and Hoppertunity meet again as part of a top-class field for the Clark, a highlight of the Thanksgiving weekend featuring four Grade 1 winners plus leading three-year-old Gun Runner.

After finishing second in the Breeders’ Cup Classic, Effinex (Jimmy Jerkens/Junior Alvarado) took the 2015 running of this $500,000 contest by three-quarters of a length. But he could finish only seventh behind Arrogate in this year’s Classic – three places behind Hoppertunity (Bob Baffert/John Velazquez), who had also beaten him in the Jockey Club Gold Cup at the start of October.

Effinex is joined by stablemate Shaman Ghost (Jimmy Jerkens/Javier Castellano), the Woodward Stakes winner who missed the Classic after spiking a fever the day before the race. Gun Runner (Steve Asmussen/Florent Geroux) beaten by Tamarkuz in the Dirt Mile, has won twice at Churchill Downs, where he was third in this year’s Kentucky Derby.

Bidding for his first Grade 1 success, he breaks from the rail in a ten-runner field also featuring talented front-runner Noble Bird (Mark Casse/Julien Leparoux), who comes into the Clark off impressive back-to-back victories in lesser grade and won the Grade 1 Stephen Foster at this venue last year.

A second meeting for Del Mar Oaks winner Harmonize (Bill Mott/Junior Alvarado) and Hawksmoor (Arnaud Delacour/Florent Geroux), separated by a nostril when second and third to Time And Motion in a tight finish to the Queen Elizabeth II Challenge Cup at Keeneland. Hawksmoor, twice a Group-race winner for Hugo Palmer, is now trained in the States and has a 3lb pull this time.

Prize-money for the Breeders’ Cup Sprint has been withheld by the California Horse Racing Board. Such action sometimes indicates an abnormality in a post-race dope test for one of the placed horses, and purses for the other 12 Breeders’ Cup races have been distributed as normal. "All I know is we got our money," said Bob Baffert, trainer of the winner Drefong, quoted in the Daily Racing Form.

Top two-year-old Not This Time retired after injury

Breeders’ Cup Juvenile runner-up Not This Time, said by trainer Dale Romans to be the best he has ever trained, has been retired to Taylor Made in Kentucky after being diagnosed with a soft-tissue injury to his off-fore.