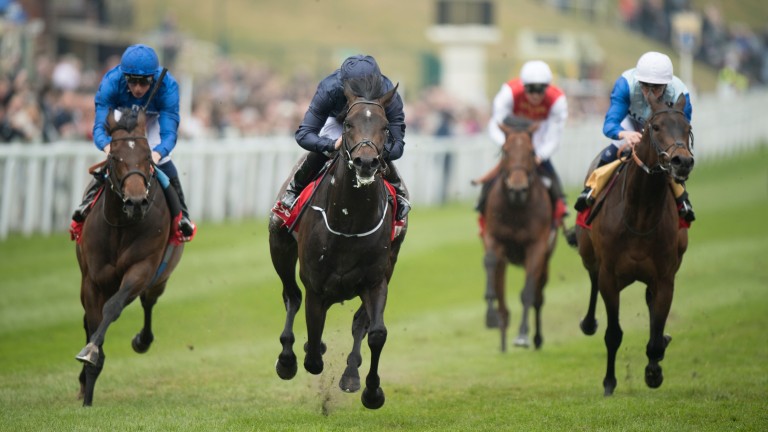 Oratorio and Hawk Wing had their egos bruised at Epsom before striking back in the Coral-Eclipse and Aidan O'Brien is hoping for a repeat from Cliffs Of Moher, with the Derby runner-up looking sure to start favourite for Saturday's showpiece having attracted sustained support on Tuesday.

O'Brien has won the Eclipse five times and Derby defeat proved no barrier to Sandown success for either Hawk Wing in 2002 or Oratorio in 2005.

This time Cliffs Of Moher, narrowly denied by Wings Of Eagles last month, leads the Ballydoyle army into battle and his trainer believes the 1m2f trip could be his optimum distance.

"Everything has gone very well with Cliffs Of Moher since Epsom and we've been very happy," O'Brien said on Tuesday. "He went to Chester for the Dee Stakes over a mile and a quarter and we weren't entirely sure whether he'd get the trip or not. As it turned out, he got it well and he enjoyed it.

"We then stepped him up to a mile and a half at Epsom and we weren't sure he'd get that either. He didn't really see out that trip and was caught late, so we don't know whether it was a case of him not fully staying or whether it was a lack of fitness as he'd only one run under his belt at Chester going there.

"We'll find out at Sandown whether a mile and a quarter is his ideal trip or not. We still have quite a few left in at the moment but Cliffs Of Moher is the horse we're looking at for the race."

David Stevens, speaking for race sponsors Coral on Tuesday, said it would take something dramatic for Cliffs Of Moher not to be sent off favourite after they cut him to 9-4 (from 11-4).

Stevens said: "Cliffs Of Moher has been at the head of the betting since Aidan O'Brien said the race was the likely next target for the Derby runner-up, and having been 3-1 for the race following the latest entry stage on Monday, Ballydoyle's main hope has been by far the best-backed contender in the last 24 hours."

He said: "Cliffs Of Moher has easily been the most popular horse in the last 24 hours and the fact we first laid him at 8-1 tells its own story. He's our worst loser in the race and looks highly likely to be sent off favourite."

Nicola McGeady, of Ladbrokes, said the event was developing into a two-horse race on the betting front with Cliffs Of Moher (9-4 from 11-4) and Eminent (4-1) the only contenders attracting support.

She added: "We thought the race looked really competitive when the declarations came out, but there are only two of interest to punters –Cliffs Of Moher and Eminent."

FIRST PUBLISHED 6:15PM, JUL 4 2017
Everything has gone very well with him since Epsom and we have been very happy