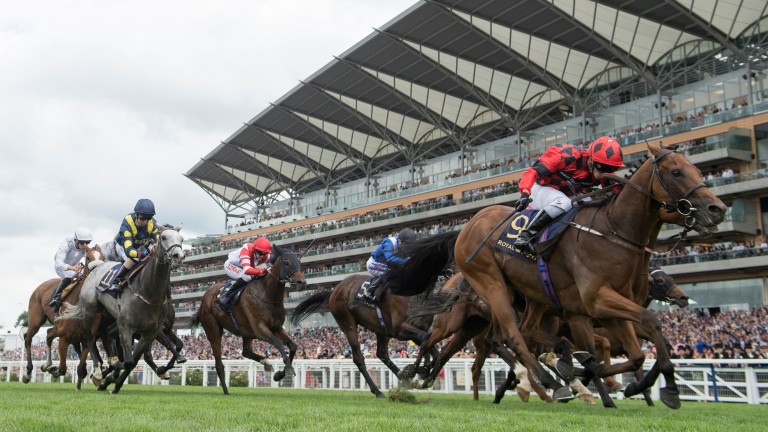 At a meeting famed for its pomp and pomposity, Snoano brought some proper down-to-earth northern spirit to Royal Ascot with his unflashy, uncompromising and unexpected success.

His jockey David Allan had hopped on the train down to Ascot –shunning the grand arrival preferred by many – while trainer Tim Easterby went to marshal his runners at Redcar instead of donning his top hat and tails.

But how the race worked out perfectly for Snoano. He may be blessed with courage and a willingness to win but rather lacks for early speed. This leaves him susceptible when the pace is false. Fortunately they went like the wind.

“He doesn’t have much pace early so when they go a good gallop it helps him,” said Allan, 34, after securing his first Royal Ascot win.

“He really likes to come through horses and we set off at a right gallop, which is what he needs.”

If Snoano needed a strong gallop then Allan required nerves of steel to ride him, switching the five-year-old from the inside to the outside as routes to the front closed at the rapid pace. But once he found the gap needed, Snoano powered through to score at 25-1.

Allan added: “In the second half of the race he always comes into his own. I tried to find a way through on the inside but we had to switch and come wide instead. He never flinched and was very brave.”

Easterby was claiming his fifth Royal Ascot winner in all, but his first since Fayr Jag won the then Golden Jubilee in 2004, and Allan is hoping he does not have to wait too long before gaining a second success.

"Coming here and getting a good ride is hard enough and to get a winner here is a big achievement," he said. "It’s something I've wanted to do for a long time and I hope I can do it again."

There was also jubilation for winning owner Martyn MacLeod, whose Huddersfield-based Leods Contracts are manufacturers of fire doors.

“That was absolutely fantastic, it really was,” he said. “He's my first runner at Royal Ascot; not a bad way to start, is it? We got some money on – more than a fiver.

“We ran him at Ripon and he got a bit of interference which stopped him going forward at the right time, but today when the gap came he was brave enough and just got in it.

"They went off at a good, fast pace and he hasn't got early pace, so it suited him to a tee.”