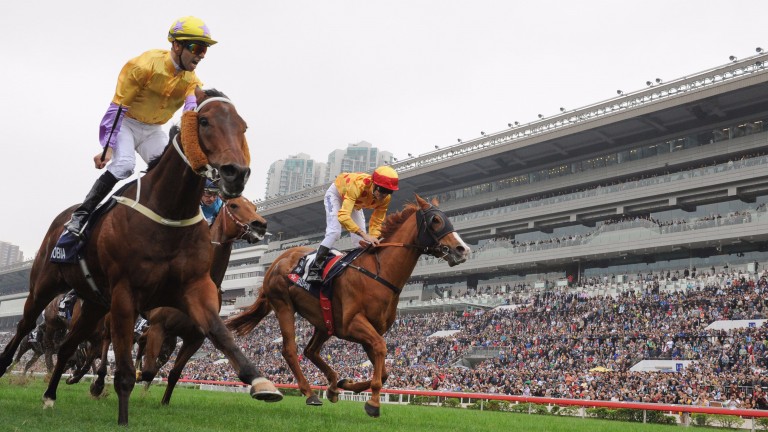 The local team know their best chance of a victory comes in the Sprint, which appears to lack a superstar but consequently has a wide-open feel.

No jockey has a better record in this race than three-time winner Brett Pebble, who rides Lucky Bubbles, and he gave his overview of the home challenge. "Mine is certainly the young one on the way up but Aerovelocity looks the benchmark. Amazing Kids has been a touch disappointing and Peniaphobia may not get as easy a time of it as last year."

Peniaphobia, who made all to win by half a length last year, will be ridden this time by Silvestre de Sousa.

All about the pace

With the bend coming fairly quickly, a burn-up is expected for the lead. But it might not be too frantic as the obvious pace is drawn low, meaning Peniaphobia and Takedown should race abreast around the turn, and no-one is likely to be keen on conceding any further ground around the outside.

A blistering gallop would help Ryan Moore's mount Big Arthur, who has the unenviable berth of stall 13 to overcome. In all likelihood he will have to be waited with and delivered in the home straight. At least he should get a clear run down the outside, which is something those on the rail cannot be guaranteed.

Kenichi Fujioka, trainer of Big Arthur
I wanted more of a middle post but unfortunately we have got 13. I'm going to rely on Ryan [Moore]'s best judgement and hopefully he can get a nice smooth race. He's a very good horse, he's training well and we're happy with the way things are going.

Gary Portelli, trainer of Rebel Dane
I'm as happy with him as you could hope to be. He's much more relaxed this morning [Friday] and putting the weight he lost back on. He's 488kg now and he was 490kg when he won the Manikato Stakes.

Tomohito Ozeki, trainer of Red Falx
He travelled over with no real effects and settled in very well. Things have progressed well and I hope he'll be at the same level [as he was for the Sprinters Stakes]. The direction of the course here in Hong Kong suits his running style quite well.

Richard Fahey, trainer of Growl
Stall 12 isn't ideal but it's not impossible. There's an awful lot of pace in the race and it'll be a different pace to he's used to, so we'll see how he copes, but hopefully he'll be travelling in behind them and come home quick.

Gary Moore, trainer of Takedown
He looks fabulous, he moved well in his final gallop and I think he'll be hard to beat with a favourable draw. I imagine we'll sit alongside Peniaphobia, take it up at the 200 [1f out] and that'll be it.