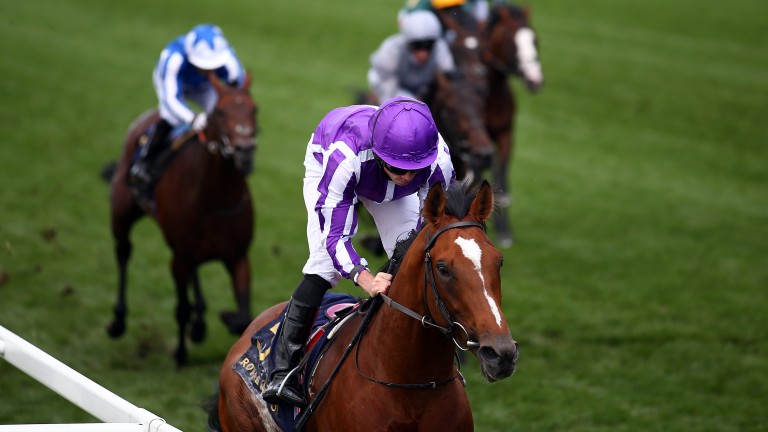 Eagles By Day has a long way to go to emulate his illustrious stablemate Big Orange, but he can take another step on the road to the Gold Cup with a bold show in the Bahrain Trophy.

The Sea The Stars colt ran his best race when third to Japan in the King Edward VII Stakes at Royal Ascot and is capable of doing better again as he steps up to 1m5f for the first time.

Eagles By Day’s dam Missunited finished second in the 2014 Gold Cup, so there is every chance he will be suited by even longer distances in the future.

Trainer Michael Bell said: "He ran a very encouraging race at Ascot and this looks the right race for him. I think he will be suited by the track and the trip."

Can mission thrive for the step up in trip?

Spanish Mission is also stepping into uncharted territory. Having finished second in a Listed race to Private Secretary at Goodwood over 1m3f on his last outing, he now tackles an extra two furlongs  on his first crack at Group 3 level.

Trainer David Simcock said: “He gives every indication that he will get the trip and I’m keen to have a go as this race is worth a lot of money.

"It’s possible that the form of the favourite is overrated as he came off a ridiculously fast pace at Ascot.”

Aidan O’Brien won the Bahrain Trophy with Housesofparliament in 2016 and is represented this time by Barbados, who was runner-up in the Queen’s Vase.

The form of that Royal Ascot race will also be tested at Newmarket on Thursday when the winner of the Queen’s Vase, Dashing Willoughby, takes on Masar in the Princess Of Wales's Stakes.

O'Brien said: "He ran very well when second in the Queen's Vase last time. He came out of the race well and while he hasn't done a lot since, he's in good form."

Nayef Road finished just behind Barbados in the Queen’s Vase, and trainer Mark Johnston said: “We thought he would be suited by the step up in distance and that proved to be the case. There’s no reason why he shouldn’t run well again.”

John Gosden, trainer of Waldstern
This is a bit of a fact-finding mission for Waldstern, who has yet to race over this far but should like the ground. It’s a race we have won before and he has the right profile.

William Haggas, trainer of Boerhan
This is a big step up in trip and class for the horse. We want to get him over further and we think the first-time blinkers will help. I’ve always liked the horse and I’m keen to support this race as it’s worth so much money.

Andrew Balding, trainer of Ranch Hand
He has a fair bit to find but he’s a nice horse in the making. He ran well in the Lingfield Derby Trial behind Anthony Van Dyck last time, especially as he wasn’t ideally placed turning in. He stayed on well and Newmarket should suit him.

FIRST PUBLISHED 6:00PM, JUL 10 2019
He ran a very encouraging race at Ascot and this looks the right race for him. I think he will be suited by the track and the trip