Dynaste out to take advantage of sliding mark in valuable event 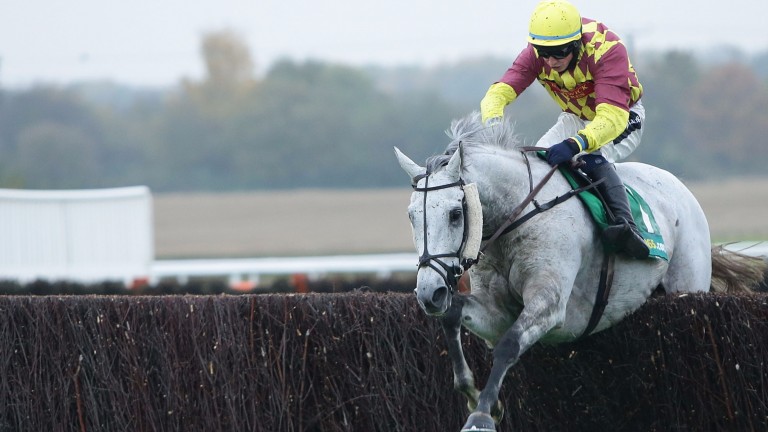 David Pipe won the inaugural running of this £100,000 staying test for veterans with Soll 12 months ago, and many eyes will immediately be drawn to the chance of Pond House-trained Dynaste who competes off a mark of 145, having been rated as high as 169 during his heyday.

Runner-up to a resurgent Silviniaco Conti last February in the Grade 1 Ascot Chase when equipped with the same tongue tie and blinkers combination he wears on Saturday, the 11-year-old could take some beating.

Rocky Creek, another who has tackled Grade 1 company in the past, boasts recent winning Sandown form and may also attract plenty of support.

Aachen bids to go one better

Aachen, who made such a bold bid to land this race when a neck second in 2016, was pulled up behind Vieux Lion Rouge on his seasonal reappearance in the Becher Chase at Aintree. He ought to improve considerably for that run.

Charlie Mann, who landed another big-field staying prize at Plumpton on Monday when Morney Wing took the Sussex National, is represented by Cody Wyoming, a winner at Lingfield on his penultimate start.

Four of the 19 runners boast winning form at Sandown. They comprise of Rocky Creek, Aachen, Loose Chips and Wychwoods Brook.

Harry Fry, trainer of Shuil Royale
He hasn’t been out since he won nicely at Aintree in the veterans’ qualifier. It’s amazing to think he's topweight, giving weight away to the likes of Dynaste, who have been running in King Georges and we're running off a career-high mark at the age of 12, but that’s the way it is. It’s a tough ask off topweight.

Harry Derham, assistant to Paul Nicholls, trainer of Rocky Creek and Aerial
Rocky Creek has been trained for this race. I always think with him the first four fences are important. If he gets into a good rhythm he'll run well. I hope he's on a going day. We want Aerial to travel and get into the race. He's a bit like Rocky in that things have to go right for him, but in a slightly different way. If he jumps well and gets into a rhythm down the back straight there's no reason why he can’t run well.

Tom George, trainer of Saint Are and Forgotten Gold
Forgotten Gold goes there in good form but is on a career-high mark following his win at Leicester last time. He wouldn’t want too much rain, which also applies to Saint Are.

Venetia Williams, trainer of Aachen and Bennys Mist
Aachen was narrowly beaten in the race last year on much softer ground. He’s had a good preparation. Bennys Mist has run well at Sandown before. He came back fine from Aintree.

Nigel Twiston-Davies, trainer of Astracad
He’s done nothing wrong this season and goes there in good form. He wouldn’t want too much rain.

Nicky Henderson, trainer of Ericht
It’s a very good prize for the good old boys. The trip tests his stamina, but you’ve got to have a go.

Harry Whittington, trainer of Wychwoods Brook
I was disappointed with the way he jumped at Kelso so we've done plenty of schooling with him. He probably would have needed the run. He has come to himself the last couple of weeks and if he could run to some of his best form he should be in the mix.

Emma Lavelle, trainer of Court By Surprise
He doesn’t know he’s 12 and is in great heart for his age. It’s competitive enough - as you'd expect for the money - but he won’t be disgraced.

Colin Tizzard, trainer of Theatrical Star
We were going to send him over hurdles but he schooled so well the other day we thought we might as well have a crack at this. He had previously lost his way a bit but perhaps he was just not quite right in himself. He's in good shape now.