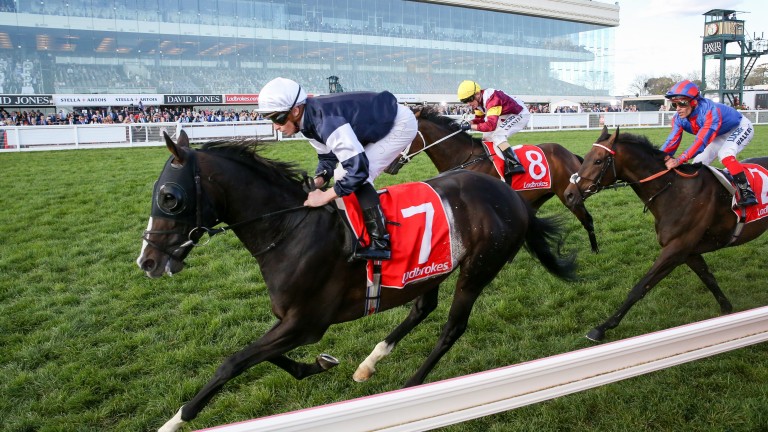 Yucatan: was impressive in the Herbert Power Stakes
Racing Photos
1 of 1
By Stuart Riley in Melbourne UPDATED 7:47AM, OCT 31 2018

Yucatan will have to win the Lexus Melbourne Cup if he wants to have as many wins in Australia as name changes as the Aidan O'Brien-trained four-year-old, renamed Yucatan Ire, has had his name reverted back to the original.

The same also applies to Sound Check, the five-year-old bought from Germany to race for Michael Moroney and momentarily renamed Sound after his 12th in the Caulfield Cup.

Racing Australia stated: "As both horses have already competed in Australia this season under their original names, and recognising the Melbourne Cup is broadcast globally, the standard naming practices will not be applied in this instance.

"Traditionally international racehorses coming to Australia, temporarily or permanently, have been required to change their names where the name is also registered to an Australian racehorse. The intent of this practice has been to avoid confusion to punters, race callers and administrators.

"In the current situation, as Yucatan and Sound Check have already competed under their original names in the Herbert Power and Caulfield Cup, punters are unlikely to be confused."

Jockey plans for the Cup

In further Yucatan news, James McDonald will keep the ride on the 5-1 favourite for the Lexus Melbourne Cup with Aidan O'Brien's travelling head lad confirming Ryan Moore will partner The Cliffsofmoher.

Whether Moore chose The Cliffsofmoher, or Lloyd Williams opted to stick with McDonald, is unknown – but given the glowing reports coming out of Werribee the Ballydoyle number one is on the clear second string.

As expected Jim Crowley will travel down to partner Muntahaa in the race that stops a nation, while one of Australia's very best, Craig Williams, has been confirmed for the Chris Waller-trained Youngstar.

Latrobe to miss the Melbourne Cup with Mackinnon preferred

'We have a few boxes he could dig out!' Matt Cumani hoping to see more of dad

FIRST PUBLISHED 12:37PM, OCT 30 2018
He'll be trotted up tomorrow morning for the vets to determine if he can race