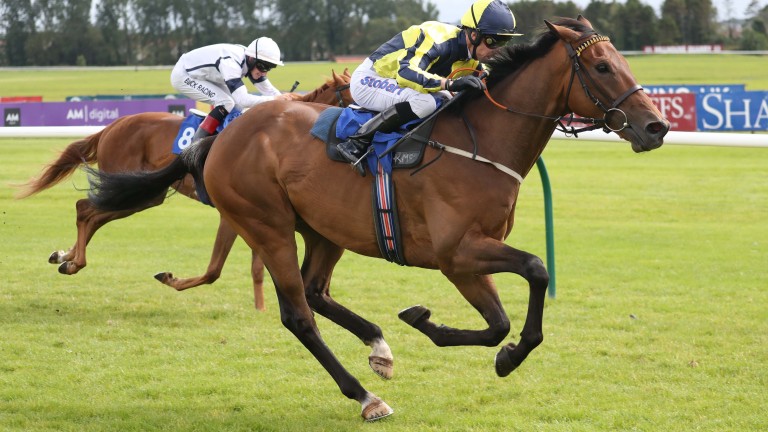 Home hope: Dubawi Fifty bids to raise the roof for the locals at Newcastle on Saturday
John Grossick
1 of 1
By Bruce Jackson UPDATED 3:31PM, JUN 29 2019

The late defection of last year's all-the-way winner Withhold still leaves an intriguing race with other long-absent contenders to the fore not least Gibbs Hill, who punters have piled on this week to make him favourite from 20-1 despite an absence of 724 days.

Geordies have a local to cheer in Dubawi Fifty, trained just 20 miles away from the course by Karen McLintock, while Withhold's owner Tony Bloom still has a leading contender in Stratum, who enjoyed no luck in running when beaten favourite in the Ebor at York last year.

Leigh Roche, seventh on Lagostovegas in the race last year, has come in for the ride on the second favourite and said: "I watched last year's Ebor and he was so, so unlucky. He was almost knocked down twice and I think he would have went very close with a clearer run. He runs off the same mark here and I'd like to think he will be a big player as the race doesn't look as hot as that Ebor was."

Dubawi aiming for a local success

Cast your mind back a year and Dubawi Fifty was all the rage for the race, and a fairytale story being the star of his small local stable. He was coming into the race off a narrow defeat in the Ascot Stakes at the royal meeting the previous week.

But a "small soft-tissue injury" meant Paul and Clare Rooney's stayer failed to make the Plate and he has not been seen since Ascot, instead convalescing with the owner's racing manager Jason Maguire.

Trainer Karen McLintock said: "He has been back with me since April and he has strengthened up a lot but it is a bit of a big ask going there without a run but we didn't have time to get one into him.

"He has run well on the surface and there are a lot of pluses for him and I think the Plate will bring out the best in him."

Luke Morris, who won the race on Juniper Girl in 2007, rides Dubawi Fifty for the first time.

Gamble on the line

Last year's winner Withhold obliged on his seasonal debut but Gibbs Hill will take it to a whole new level if winning after two years off the track and after an 11lb hike in the weights from his sign-off success.

Roger Varian said "This has always been the plan since he came back into training at the turn of the year and his recent work has been pleasing.

"His form on the synthetic surfaces has always been very good. He's higher in the handicap now but he looked very good when we last saw him at Kempton just under two years ago."

It is 25 years since Mark Johnston won his only Plate with Quick Ransom and he goes in with a strong hand of three, headed in the betting by the "incredible" King's Advice, who has won six in a row since joining the Middleham trainer.

Charlie Johnston, assistant to his father, said: "Back in April, Austrian School would have been the clear and obvious pick but the other two have narrowed the gap since.

"King's Advice has been incredible and we'd have laughed at the thought he would win six in a row and be rated 30lb higher on 101 but every time the handicapper has looked as if he was going to catch up with him we have upped him in trip and hopefully that is the case again.

"It is a significant step up in class but he has a fantastic attitude."

Johnston feels the York runs last time of Chester Cup winner Making Miracles and Austrian School can be forgotten after they paid for being involved in a pace battle early.

He worked well in his last piece of work on the Limekilns and two miles will suit him as well as the surface. I hope to see him handy and relaxed and Tom Greatrex takes weight off him and I am hoping for a big run.

This has been the plan since Chester and he has won on the all-weather so I hope the surface will be fine and I am hoping for another good run.

They all go there in good form and look to be drawn well on last year's evidence. Speedo Boy has had this on his radar since Chester and ran a good trial at Newmarket last time. Time To Study ran a blinder to be third in the Ascot Stakes but that was only 11 days ago so we'll have to see if it's left its mark. Shabeeb will come on for his comeback and could well be in the shake up.

He has a nice draw and is a winner at the track last time after which it has been the plan to wait for this and the trip should be fine.

The ground was too soft for him at Ascot and he didn't stay. He's been up there since Thursday and is in great form. His draw bothers me a bit - he was drawn 20 when winning the Vase last year and is in one this year. He is a horse who needs room and time to lengthen but he will like the deeper track in this heat.

FIRST PUBLISHED 6:00PM, JUN 28 2019
He has run well on the surface and there are a lot of pluses for him and I think the Plate will bring out the best in him