Talk of the Tracks Newcastle Tuesday 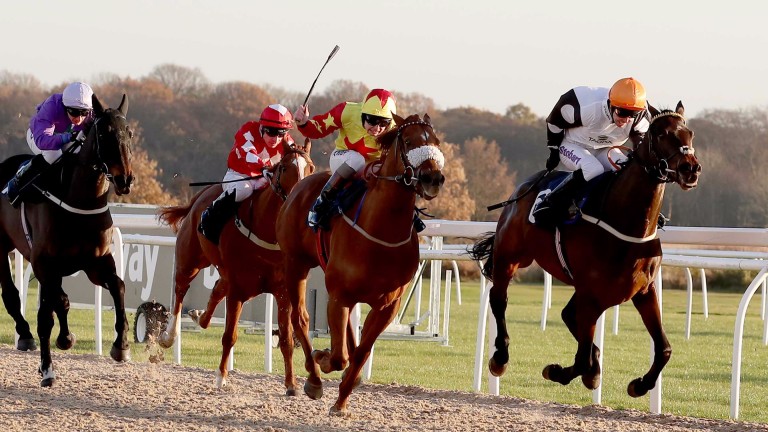 The step up to two miles proved just the ticket when Dubawi Fifty got off the mark on his first try at the trip, scoring in good style under Graham Lee, who pushed him clear in the last furlong to win by three-and-a-quarter lengths.

He is owned by Paul and Clare Rooney and is the only horse they have in training with Karen McLintock, who said: "He's a big baby and I'm not sure whether he'll go jumping or stay on the Flat. He's a lovely horse and all he does is want to please you. I think he'll make a nice two-mile handicapper and there is a fast-track qualifier coming up here soon that I've got that in mind."

Earlier McLintock's Taopix looked as though he had held on to win the first 1m2f handicap but, to the surprise of almost everyone, the photograph showed that Bollihope had got up by a nose.

McLintock said: "I thought he'd won and even when you look at the photograph it isn't really clear. It's just something you have to take on the chin."

There were certainly plenty of heads being shaken after the verdict was announced and off-course Taopix had traded to good money at the basement price of 1.01. The verdict also caused a problem or two in the betting ring with backers of Bollihope having prematurely thrown their tickets away as they thought he had been beaten.

The winner is trained by Richard Guest and was ridden by Connor Beasley, who said: "I got him rolling but I wasn't sure he'd won. It was heads up and heads down and luckily my horse's nose was in front."

It was a fine day for Guest, who also took the second division of the 1m2f handicap with the Danny Tudhope-ridden Polar Forest – who was winning for the first time since August 2015 having slipped 16lb down the ratings – and then completed a near 123-1 three-timer with Mr Potter in the 7f handicap.

Mr Potter was a second winner for Beasley, who brought his tally for the year up to 58, which is just three short of his personal best achieved in 2014. He has done remarkably well considering the horrific injuries he suffered in a fall at Wolverhampton last summer.

While Lingfield and Southwell had to inspect due to the heavy overnight frost there were no problems with the Tapeta surface here despite temperatures getting down to as low as -5C.

Clerk of the course James Armstrong said: "This was our first big test and it was fine. Unlike Fibresand you don't need to work Tapeta to prevent it from freezing – it seems resistant to low temperatures. There was a slight white hoar over it this morning but horses were working early on and it was fine. If anything the frost tightens it up a bit."

Not for the first time punters betting on close finishes here have got it wrong. It can be a deceptive angle.