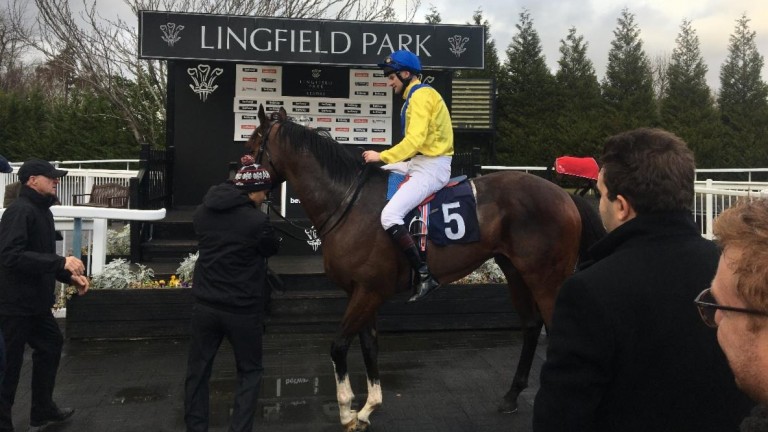 Dubai Warrior comes in after winning at Lingfield on Saturday
1 of 1
By David Milnes UPDATED 1:49PM, DEC 22 2019

Dubai Warrior, who landed an important first black-type victory in the Listed Betway Quebec Stakes at Lingfield on Saturday, could be aimed at lucrative races in the Middle East in 2020.

The one-time Derby hope looked a ready-made candidate for the Group 3 Winter Derby back at the Surrey track in February, but trainer John Gosden is keen to keep the progressive three-year-old's options open.

He said: "No immediate decision will be taken over where Dubai Warrior heads in the new year. There is a strong domestic programme, including the Winter Derby and the Easter Classic, but there are also options in the Middle East to consider."

Dubai Warrior took his tally to four wins from five outings on the all-weather when he comfortably accounted for stablemate Court House under Rab Havlin at Lingfield off an official rating of 107.

Also on the seven-race undercard at the King Abdulaziz racecourse is the $1 million Neom Turf Cup over 1m2½f, which is to be staged on the still-under-construction grass track.

Beyond that, Dubai Warrior could have options on Dubai World Cup night at Meydan in March.

Gosden said: "Dubai Warrior will be entered at the entry stage for the Saudi races on January 7 after which we will know more about what rating you need to get into particular races.

"I would think there will be a lot of American interest, and rightly so, in such a bold venture. We might also enter a couple of others at the new fixture and we'll know more nearer the time."

FIRST PUBLISHED 1:18PM, DEC 22 2019
Obviously there is a strong domestic programme including the Winter Derby and the Easter Classic but there are also options in the Middle East