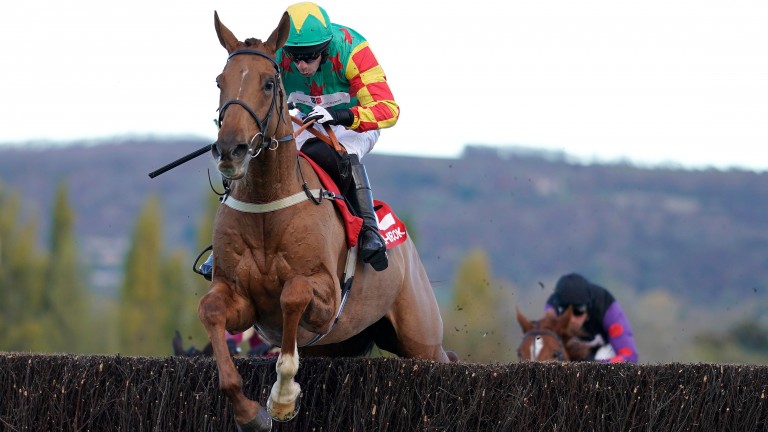 Lil Rockerfeller (Wayne Hutchinson) adds a Cheltenham novices' chase to his multiple wins on the Flat and over hurdles
Alan Crowhurst
1 of 1
By Graham Dench 4:11PM, DEC 15 2019

Neil King's popular multi-discipline stayer Lil Rockerfeller has tweaked a tendon and will not run again this season.

It is disappointing news for the trainer, who last year enjoyed a 15-length Glorious Goodwood success with the eight-year-old and this year was eyeing a crack at the Pertemps Network Final at Cheltenham in March. However, King is confident no serious damage has been done.

Racecourse bookmaker and part-owner Andy Smith tweeted the news on Saturday after the form of Lil Rockerfeller's Coral Hurdle third at Ascot last month had been franked by Call Me Lord and sixth-placed Blu Cavalier, and King confirmed it on Sunday.

A great weekend for Call Me Lord and Blu Cavalier, but unfortunately Rocky has had a problem and won’t race again this season, so unfortunately misses Wincanton Boxing Day and my plans to win the Pertemps will have to wait.. pic.twitter.com/dboNZU7Ozf

King said: "He's just tweaked a tendon. It's minor, but it's nonetheless a warning sign and so we have to take notice. He won't run again this season, but he should be back by this time next year."

Lil Rockerfeller has enjoyed a long and varied career and proved notably sound until now. A haul of 11 wins from 45 races for just short of £475,000 included two races on the Flat for Richard Hannon before he joined King, and he underlined his versatility after the Goodwood win by winning novice chases on his next three appearances.

King said: "He's never had a problem in his life before and has been as tough and as sound as can be, but time has caught up with him. We were aiming him towards the Pertemps and had hoped to qualify him at Wincanton on Boxing Day, but that's all been shelved."

FIRST PUBLISHED 4:11PM, DEC 15 2019
He's just tweaked a tendon. It's minor, but it's nonetheless a warning sign and so we have to take notice