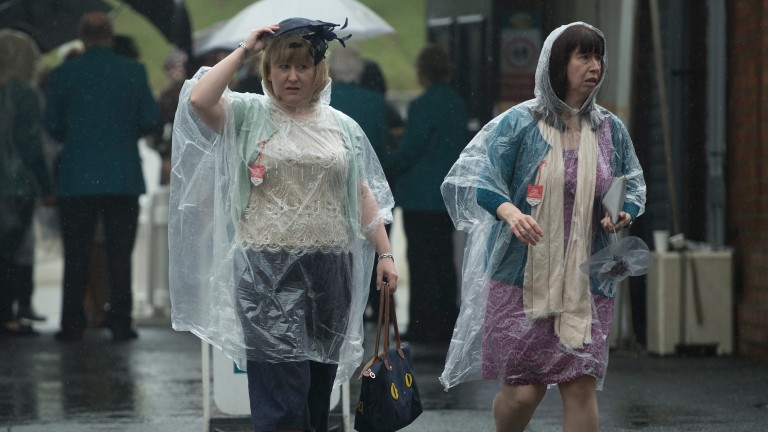 Racegoers get a soaking arriving on the Knavesmire on Wednesday
Edward Whitaker
1 of 1
By Jon Lees 6:15PM, AUG 23 2017

After the opening-day deluge the weather is set fair for at least the next two days of the Ebor festival.

Clerk of the course and chief executive William Derby does not anticipate a repeat of Wednesday morning's dramatic events when 11 horse were pulled out in the wake of an unwelcome downpour that left arriving racegoers soaked and dumped 15mm of rain on the track.

When declarations were made the going on the Knavesmire was good to firm but by the time racing began the conditions had been reduced to good to soft, soft in places, after an intense two-hour deluge that engulfed most of the North Yorkshire region.

"To get over half an inch of rain in two hours just as people was arriving was a shame," said Derby. "It was good thing it cleared up over lunch and was dry for racing. Yes it was slightly disappointing to get it but that's the lap of the gods."

He added: "We will leave the going as it is overnight. We will have a look first thing in the morning. The times have been good to soft times. I think it will start to dry out. The sun is due to get out and it will be 20C.

"We are going to move the rail the home bend three metres from the 9f to the entrance of the home straight to provide fresh ground which will add 11 yards to the races over that course like the Yorkshire Oaks."