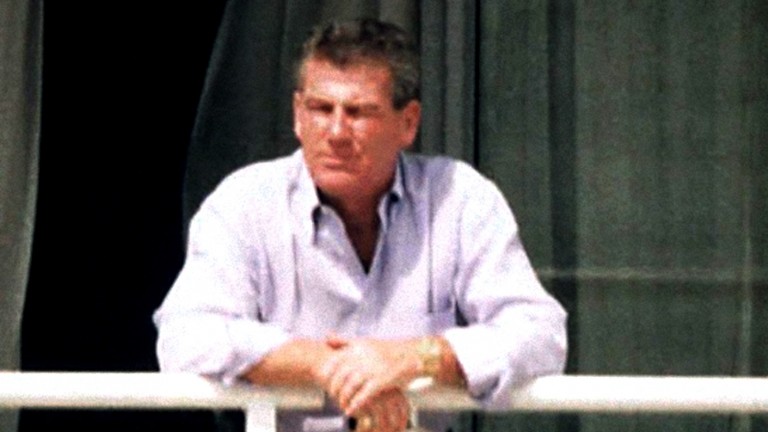 Brian Wright, a drugs baron who has been banned from British racing for an elaborate race-fixing scheme since 2002, was released from prison on Tuesday after serving half of his 30-year sentence.

The 73-year-old ran one of Britain's biggest narcotic empires during the 1990s, dealing directly with Colombian cartels and smuggling vast quantities of cocaine. He was arrested in 2005 and two years later was sent to Whitemoor Prison, a maximum security institution.

Wright is one of the most notorious figures in the last 30 years of British racing and he was the subject of a 2002 BBC Panorama investigation, which brought to light the scale of his corruption.

He gambled on racing to conceal the true source of his wealth and ran 'The Racing Organisation', a group of five men who placed substantial bets of up to £100,000 at a time using inside information from a web of jockeys, including Gold Cup winner Graham Bradley.

Wright was found to have entertained numerous jockeys on a lavish scale – more than 20 names were reportedly found in his diary – and entered horses owned by him in other people's names.

He regularly attended race meetings and hosted parties at Ascot, where he had a box, Windsor and Newmarket. He was also a friend of comedian Jim Davidson, with whom he owned horses.

Wright infamously orchestrated the doping of more than 20 horses in 1990 through jockey Dermot Browne, including Norwich and Bravefoot, two favourites controversially beaten at the St Leger meeting – one of the biggest scandals the sport has ever faced.

In 1992, Browne was warned off racing for ten years after selling information to a bookmaker while training horses. In November 2002, the Jockey Club, then in charge of the sport in Britain, banned him for a further 20 years after he admitted to the dopings.

The following month, the disciplinary committee of the Jockey Club held an inquiry into the race-fixing scheme run by Wright, who fled the country in 2000 and spent several years in North Cyprus.

This resulted in indefinite exclusion orders for all of 'The Racing Organisation', which included former jockey Barrie Wright (no relation), Brian Anthony Wright, Paul Shannon and Ian Kiernan.

Following Wright's early release, a BHA spokesperson said: "Mr Wright is excluded from all licensed premises and from being in contact with licensed and registered personnel in connection with racing indefinitely.

"He may make an application to lift the exclusion order from January 1, 2023 onwards, at which stage the BHA may review the appropriateness of the exclusion."

An international arrest warrant had been issued for Wright and he was eventually captured in Spain in 2005 following an 11-year investigation into his multi-million pound drug smuggling operation, which used luxury yachts to import cocaine into Britain.

Wright, known widely as The Milkman, because he always delivered, was reportedly forced to relinquish £2.3 million in ill-gotten gains before his release and has been sent to live in a bail hostel.

FIRST PUBLISHED 12:46PM, APR 20 2020
Mr Wright is excluded from all licensed premises and from being in contact with licensed and registered personnel in connection with racing