News BIG DOWN UNDER 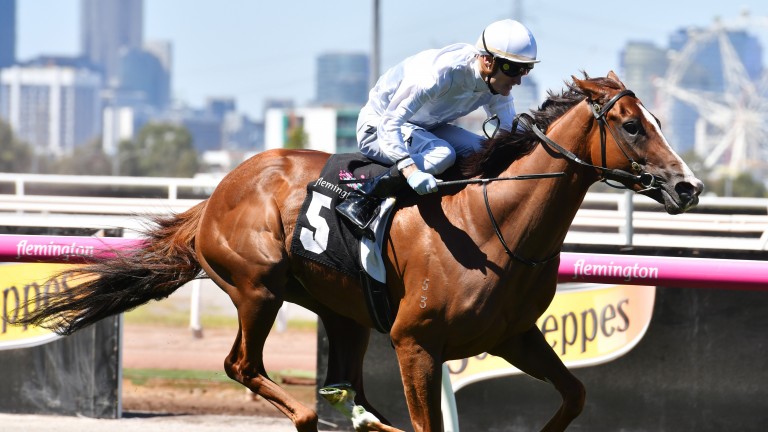 Kings Will Dream powers to the fourth of his five Australian wins at Flemington this month
Vince Caligiuri
1 of 1
By Lee Mottershead 7:00AM, MAR 28 2018

From a Pontefract maiden to ante-post favourite for the Caulfield Cup. That's the journey taken by former Micky Hammond inmate Kings Will Dream, who has just started a richly deserved holiday having taken Australian racing by storm.

Having been bought to join Hammond for 7,500gns in October 2016, Kings Will Dream finished third in two Ripon maidens for the three-strong Golden Cuckoo syndicate. He then broke his duck at Pontefract in July, after which he was sold again, this time to become part of top trainer Darren Weir's team in Ballarat, Victoria.

Since then Kings Will Dream has won every one of his five starts in Australia, most recently storming to victory in Saturday's Listed Mornington Cup in which Clondaw Warrior, a former Royal Ascot winner for Willie Mullins, finished last.

As a result of that five-length success the four-year-old is 10-1 clear favourite for October's Caulfield Cup, to which he now has a guaranteed place.

Kings Will Dream has just won the @Mornington Cup in DEVASTATING fashion. pic.twitter.com/EjPnm8u3xS

Brad Spicer, who snapped up Kings Will Dream after consulting fellow Australian agent Justin Bahen, said: "It's like looking for a needle in the haystack at that end of the market but we narrowed it down to a few likely types with some pretty stringent due diligence. We're pretty thrilled with the result so far.

"How far can a Pontefract maiden winner go? We would have been happy with a city class horse but he's turned into a potential star. It's a dream result really.

"So many big money imports come out here and fail. We've landed a very affordable horse with upside after doing our homework and have seen the other side of that story, which is great."

Spicer added: "We've been surprised by a few inquiries from UK owners with similar horses wanting to partner up with us in Australia and that's something we are really going to explore this season. That way we can give those owners an opportunity to share the upside with some big prize-money races."

Micky Hammond is delighted Kings Will Dream has thrived in Australia
Martin Lynch
Hammond said: "I've followed the horse's progress closely and watched all his Australian races live. I also met Darren Weir at the Melbourne Cup and it's obvious he has trained and placed the horse very well. If I still had him he would probably have been beaten in a Sedgefield selling hurdle by now!

"I enjoyed training him but we were made an offer we couldn't refuse and the owners now have three horses with me. It's a good story in every way."

FIRST PUBLISHED 7:00AM, MAR 28 2018
It's like looking for a needle in the haystack at that end of the market