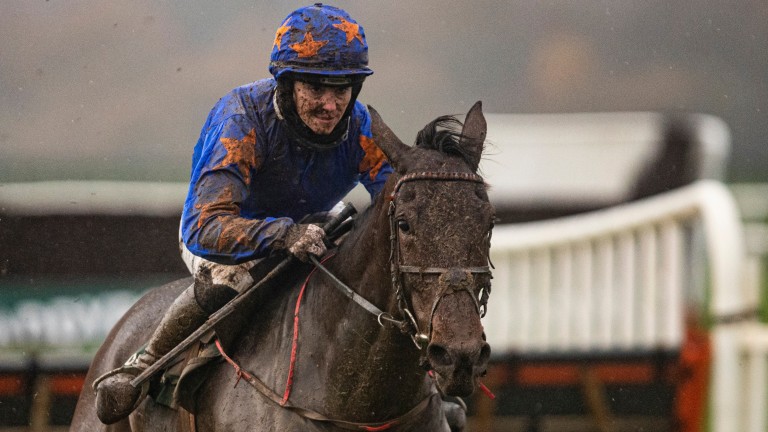 Dreal Deal: stayed on from last to first to win the Grade 2 at Punchestown
Patrick McCann (racingpost.com/photos)
1 of 1
By Brian Sheerin UPDATED 8:09PM, JAN 17 2021

What's next for Dreal Deal? Sunday's Grade 2 Moscow Flyer Novice Hurdle was a world away from the Navan handicap hurdle he landed off a mark of 84 in September, but he treated his Punchestown rivals with similar contempt as he ran out a three-length winner.

Handicaps are out and Cheltenham Festival novice contests are very much in for Dreal Deal after his sixth consecutive victory, with his trainer Ronan McNally revealing a tilt at the Supreme or Ballymore would be next up for one of the most improved horses in training.

But the trainer admitted to having had uncertainties before the race that were reflected in a market that saw the Pricewise-tipped runner, who had started favourite for his previous five wins, drift out to 22-1 (from an opening 9) on his first foray into Graded company.

McNally said: "His preparation wasn't ideal and that's maybe why the horse drifted. We did fancy him but my horses weren't 100 per cent over Christmas and had a week off.

“We also had frost at home and missed valuable work and took him to the beach last Sunday, but it was half-frozen so he hasn't really galloped. He hasn't been eating as well as he can, either, and his coat hasn't been great. Denis [O'Regan, winning jockey] also thought he needed the run.”

Anyone who laid the odds would have been happy for much of the contest, with Dreal Deal sitting last and seemingly struggling under O’Regan turning into the straight.

However, as soon as O’Regan asked for a bit more effort, Dreal Deal switched on and rounded the field to win in good style. 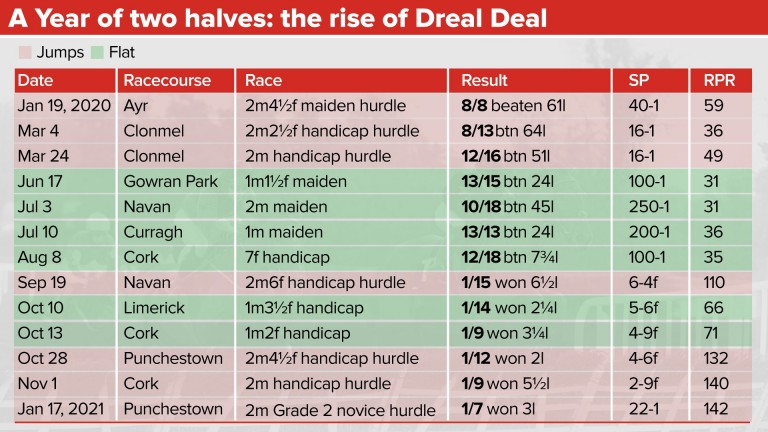 On future plans, McNally added: “He won’t be going to the Dublin Racing Festival and will probably go to Cheltenham now. I think he’s entitled to go there. If we have to go for a lesser race in between we will do that. If not it will be straight to Cheltenham.

“He will probably go for the Supreme but will be entered in the Ballymore as well. That was the dream but first he had to go and do that today. He’s done it now so we can dream.”

Dreal Deal was trimmed into a general 20-1 from 66-1 for the 2m½f Sky Bet Supreme on the opening day of the festival, with the same odds available for the following day's Ballymore over 2m5f.

Some of the gloss was taken off Sunday's race – previously won by the likes of Douvan, Min and Vautou – when Master McShee, a horse with similarly unheralded connections to those of Dreal Deal, was taken out with a stone bruise.

As they set out over two miles at Punchestown Danny Mullins played a game of 'catch me if you can' aboard Echoes In Rain, but she duly came back to the field. For a moment in the straight it appeared the Willie Mullins-trained Ganapathi would be the main beneficiary, but he couldn't live with the late rattle of Dreal Deal.

O'Regan said: "I thought they went very fast and I was nervous with her [Echoes In Rain] getting the allowance.

“His handicapping experience stood to him and he kept jumping so well that I was able to hold on to them."

O'Regan added: “He can travel real well but it just takes him a while to get going and thankfully he got going in the straight. He’d a good jump at the last and won all right in the end.

“He’s definitely entitled to step up into higher company again and it’s something to look forward to. Well done to Ronan and the team.”

FIRST PUBLISHED 1:33PM, JAN 17 2021
The six-year-old was friendless in the betting before the off and went off the outsider of the field of seven