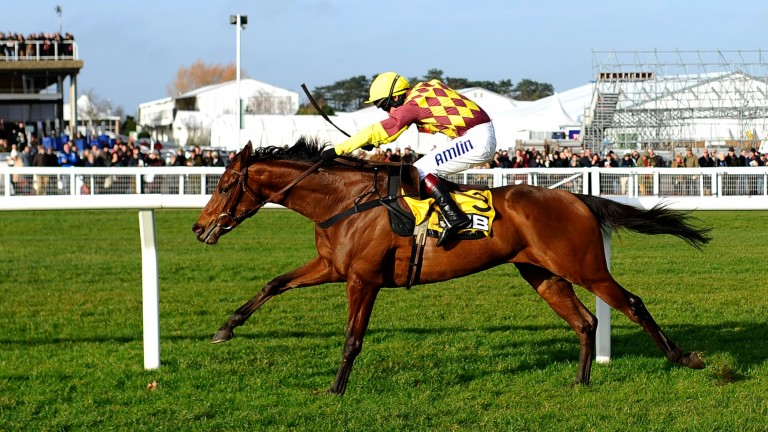 Le Rocher: winning the Triumph Hurdle Trial at Cheltenham on his last run 34 months ago
Alan Crowhurst
1 of 1
By Bruce Jackson 3:21PM, NOV 18 2016

The glut of good hurdle races this weekend has seen this £30,000 race cut up badly from 18 to just eight entries, leaving it looking light on the expected class despite six places carrying prize-money.

Punters still face a conundrum with two classy performers Bertimont, 558 days since running in the Scottish Champion Hurdle, and Le Rocher, 1,028 days since winning the Triumph Hurdle Trial at Cheltenham, returning under big weights from injury against lesser but mainly race-fit rivals.

Bertimont's claimer Jordan Williams, who has ridden five winners on the Flat and the same over jumps, grabbed the headlines with a win on Aerial in the Southern National at Fontwell on Sunday but has not ridden a winner at Ascot from two rides.

Not for the longshots

Half the favourites in the last ten years have landed the prize, while the biggest winning SP has been 8-1.

Jane Williams, assistant to Nick Williams, trainer of Le Rocher
He has been off for a long time with leg trouble but we have done all we can with him at home. He is ready for a run and we will take it from there.

Alex Hales, trainer of Minellaforleisure
The longer 2m3f and the ground at Bangor was against him last time so we are bringing him back in trip and hopefully the ground will stay good to soft. He ran well in a hotter Ascot race before that and if he shows that form again, he will run a big race.

Paul Nicholls, trainer of Cyrname
He won a hurdle at Pau but this will be his first run for us. He has needed time to acclimatise and this is a good place to start.

Philip Hobbs, trainer of Draytonian
It's his first run of the season but he was progressive last season and I hope he can improve again.

Chris Gordon, trainer of Sea Wall
He operates in completely bottomless, almost unraceable, conditions so any more rain would help him. We have been waiting for the ground to change for him, the race has broken up surprisingly and good to soft is fine to go and have a nice day out.

John Flint, trainer of Eddiemaurice
The winner of his Cheltenham race has come out and won again to frank the form. He was a good fourth and this race has cut up. He is in good form but wouldn't want it any softer. I wanted to claim 3lb off him but David Noonan has to go to Ffos Las.

FIRST PUBLISHED 6:00PM, NOV 17 2016
He ran well in a hotter Ascot race before that and if he shows that form again, he'll run a big race