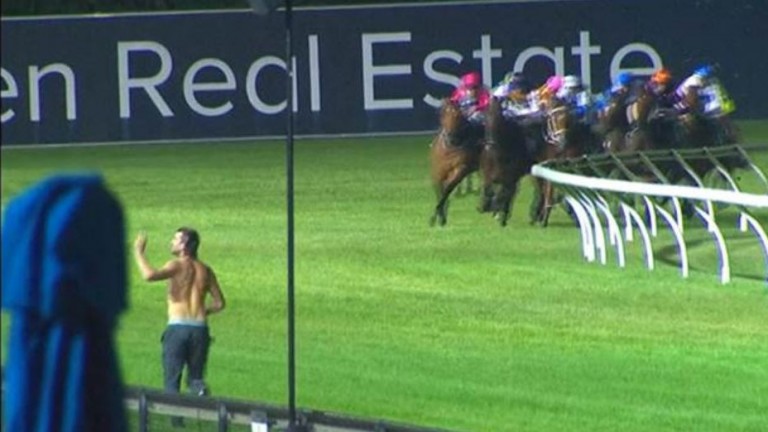 A shirtless man gets on to the track at Cranbourne before heading towards the runners on the home turn
Racing.com
1 of 1
By Racing.com/Paul Tatnell UPDATED 3:31PM, JAN 18 2020

A racegoer invaded the track during the last race at Cranbourne racecourse in Australia on Friday and narrowly avoided being hit by runners as they rounded the home bend.

The invader, a shirtless man, jumped the rail just before the race began, not far from the finish line, and was tackled by a security guard.

With the help of a friend he wriggled away after a scuffle and ran back towards the runners as they rounded the home bend, narrowly being missed by them, before hopping back over the rail and being congratulated by his friend.

Fortunately, the horses continued unscathed and there was no disruption to the race.

The Cranbourne Turf Club is calling for the individuals involved to be banned from attending racecourses for life.

Club CEO Neil Bainbridge said: "It’s the club’s view that the individuals involved should be banned from all Victorian racecourses.

"Victoria Police have copies of the footage provided by Thoroughbred Racing Productions (TRP).

"When we review the footage we will either release it on social media, which has its positives and negatives, or to bring it to some people who we know to try to identify the group."

Bainbridge said he was happy with the performance of the security team, one of whom was reported to have been assaulted in the incident.

He added: "Unless we had two-metre high outside fences we couldn’t stop this situation. From what I understand security was right on hand and did everything they could."

Click here to view footage of the racecourse invasion on Racing.com

FIRST PUBLISHED 12:34PM, JAN 18 2020
With the help of a friend he wriggled away after a scuffle and ran back towards the runners as they rounded the home bend

'The meeting was sure to be off. We were only coming here to have lunch' RIP Arthur Shone - sadly for racing, we truly won't see his like again Emmet Mullins-trained handicapper scores by wide margin after big Friday gamble 'What else would I do at my age?' - 80-year-old trainer wins with only horse Broad use of stallions strengthens Godolphin's hand in Europe and United States 'We can't go back to the same old programme' - racing warned over fixture list