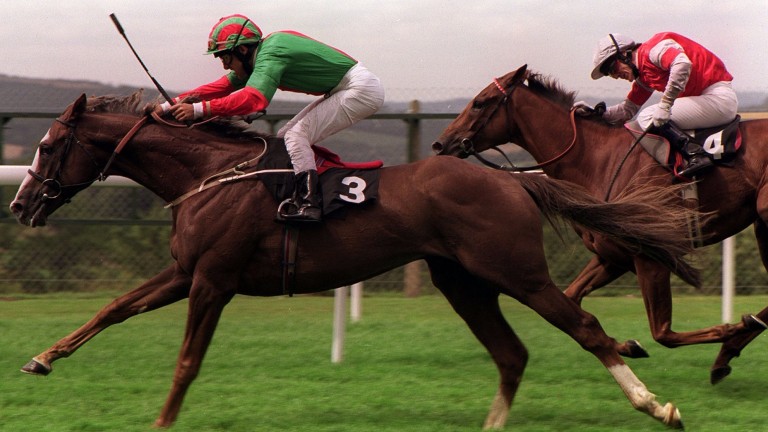 It is hard to convey just what a reception Double Trigger and Darryll Holland received when they returned to the winner's enclosure after sealing a dramatic third Goodwood Cup in 1998.

In a more understated era where the use of triumphal music was left to the Breeders' Cup and the Arc, the rush of humanity to be paddock-side and the roar produced by a crowd more specialised in being quietly appreciative was striking.

It spoke not only of the historic nature of the achievement but also of the genuine affection for Double Trigger and the sheer guts he had displayed in turning the tide against Canon Can.

The most consistent stayer of what was a deep era for the division, the son of Ela Mana Mou also collected three Doncaster Cups as well as a win and two seconds in the Gold Cup at Ascot.

Most of those successes came from trademark Mark Johnston displays of tough front-running, none more so than his Goodwood wins in 1995 and 1997, under first Jason Weaver and then Michael Roberts. 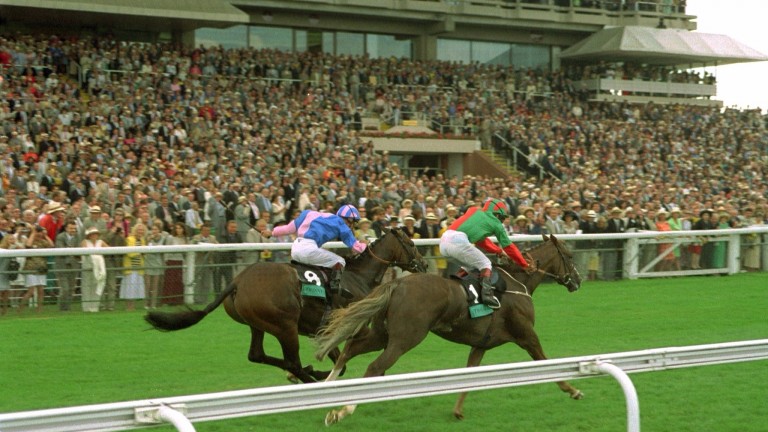 That script went out the window as the field ran downhill for the final time in 1998 as Double Trigger began to fall back through the field.

But as first Grey Shot and then Canon Can failed to gain a decisive break on the field, Double Trigger – like Stradivarius the flashiest of chestnuts – clawed his way back from the brink.

"Can he do it?" was the simple cry from BBC commentator Jim McGrath, summing up the will of the crowd and the sheer improbability of the situation.

Johnston said of that Goodwood triumph in a 2015 Racing Post feature on Double Trigger: "That's the only time I've been involved in a horse where the public were running from the stands to get to the winner's enclosure to see him."

'I wouldn't begrudge Stradivarius the record'

If racing trophies were like World Cups then the Goodwood Cup would have been handed in perpetuity to Ron Huggins, owner of Double Trigger, nearly 20 years before Stradivarius won his first.

But there is no hint of protectiveness about Huggins, sure in the knowledge that Double Trigger's place in the record books and the hearts of many racegoers is assured.

"I enjoy watching Stradivarius and he must have a good chance of winning a fourth Goodwood Cup," said Huggins. "I think he's a great horse and wouldn't begrudge him taking the record. His connections have done a fantastic job with him.

"He's been ultra-consistent and I thought his Gold Cup win last time, when he won by ten lengths, was most exciting. For a stayer to have an official rating of 125 is quite something."

FIRST PUBLISHED 10:00AM, JUL 28 2020
That's the only time I've been involved in a horse where the public were running from the stands to get to the winner's enclosure to see him

Record turnout as visitors flock to Newmarket yards for Henry Cecil Open Weekend 'Genius' Duran Fentiman brings Silver Cup joy for Ontoawinner 'I bought her dreaming of the Oaks' - progressive Five Stars exciting owner John and Thady Gosden: 'It's no different to managing a top footballer' Doncaster in search of new sponsors for key races at St Leger meeting Would you be a backer of Stradivarius at 5-2 for the Long Distance Cup at Ascot?