Pauling: Carlos Du Fruitier has done nothing but please me 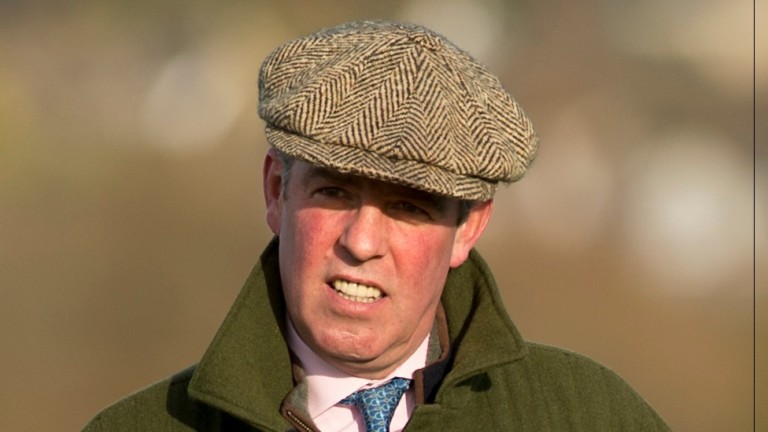 Third-placed Claimantalkinforgan, Western Ryder (fifth) plus And The New (seventh) take each other on again in a race won by a horse beaten at the festival in two of the last five years.

Black Op, who bypassed Cheltenham, beat Claimantalkinforgan into second when winning at Doncaster in February and is the chosen mount of Tom George's stable jockey Adrian Heskin, ahead of stablemate Clondaw Castle (Paddy Brennan).

No overseas challenge
Irish horses have won this race four times since it was founded in 1987, but there is no runner this year as the James Nash-trained Scheu Time missed the cut for a race in which eight horses were eliminated at the final declaration stage.

Bombers on target
Nigel Twiston-Davies has won this with Kings Road, The Cool Guy, The New One and Ballyboley so his Bombers Moon is worth keeping an eye on.

Aiming for a repeat
Ben Pauling won this two years ago with Barters Hill and tries again with Carlos Du Fruitier. Emma Lavelle bids to emulate her 2013 success with Killyglass as she runs Enniscoffey Oscar.

Tom George, trainer of Black Op and Clondaw Castle
Black Op won well at Doncaster. We kept him back for this, rather than running at Cheltenham, and this track will suit him. Clondaw Castle has a lot of pace; he had to make his own running at Stratford and that didn't suit him.

Nigel Twiston-Davies, trainer of Bomber's Moon
It's difficult in these bumpers to know what he faces, but I'm hopeful he'll run well.

Ben Pauling, trainer of Carlos Du Fruitier
He's done nothing but please me and trying to give a stone away in heavy ground at Newcastle was always going to be difficult. This ground will be much more in his favour and the track will be fine.

Nicky Henderson, trainer of Claimantakinforgan
I am surprised how well he has come out of Cheltenham. He is pacey enough which will suit but bumpers at Aintree are always difficult and this is often one of the roughest races of the week.

Harry Fry, trainer of If The Cap Fits
He's a lovely horse who won nicely at Taunton and I hope the step up in class is justified.

Iain Jardine, trainer of Loud And Clear
He's won two bumpers and his form has worked out well. The flat, galloping track will suit and he wants top of the ground. He's been working very well with some of my decent Flat handicappers so I'm expecting a big run.

Rose Dobbin, trainer of Some Reign
Whether he's good enough we'll find out, but he won really well first time at Wetherby, then it was a bit of an odd race at Kelso and he still ran very well, just beaten by a horse that Nicky Richards likes.

Neil Mulholland, trainer of Tikkanbar
He's a nice horse but we're still learning about him. Aintree should suit him, it's a very open race and I hope he has as good a chance as any.

Warren Greatrex, trainer of Western Ryder
He got a little too far back at Cheltenham and then he was caught in a bit of trouble turning in. He quickened up well but he had too much to do. This track will be fine for him, he's come out of Cheltenham well and he hasn't run a bad race yet. He goes there with a very good chance again.

Gary Moore, trainer of Larry
The form hasn’t worked out very well from his bumper win at Fontwell. He was green as grass that day and did well to win. He’s a horse we like a lot but he’s got his work cut out in this.

Tim Vaughan, trainer of Point Of Principle
He has done nothing wrong and is a tenacious little horse, but the question is whether he has the class.

Ian Williams, trainer of King of Realms
He's a nice horse with a bright future but I'm not convinced he's at the level now to win this but he ran well when he didn't handle the soft ground at Warwick under a penalty.

FIRST PUBLISHED 6:00PM, APR 6 2017
He has been working very well with some of my decent handicappers on the Flat so I am expecting a big run