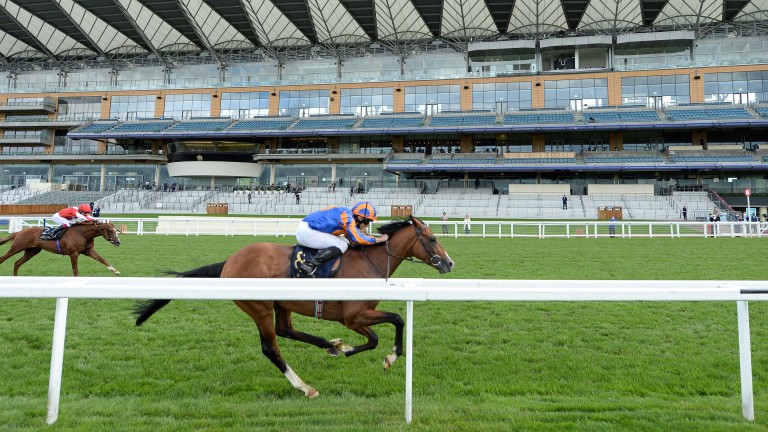 Santiago: Royal Ascot and Irish Derby ace will be a formidable opponent in the St Leger
Edward Whitaker
1 of 1
By James Burn UPDATED 7:12PM, SEP 11 2020

Aidan O'Brien and Frankie Dettori teamed up with Scorpion to win the world's oldest Classic in 2005 and each has five more triumphs in the race on their CVs, which might mean trends players think they have the St Leger sussed with Santiago.

The Queen's Vase winner finished third to Stradivarius over two miles in the Goodwood Cup last time and his Irish Derby victory means he is the only top-level scorer in the field. 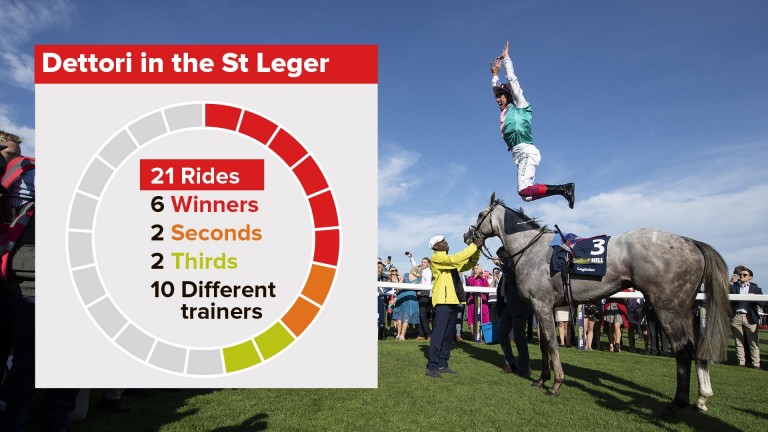 With Ryan Moore riding in Ireland this weekend, O'Brien has turned to Dettori, who said: "Santiago is a Classic winner, he stayed two miles at Goodwood and he's a great ride.

"It's an open race but he's a good ride. I think Pyledriver is the best horse against him; he's got class."

O'Brien, who has won the Classic for two of the last three years with Capri and Kew Gardens, said: "Santiago is in good form. He hasn't done a lot since Goodwood but what he has done we have been very happy with it. He seems to be maturing well. Everything seems good with him."

Irish Derby third Dawn Patrol and Mythical also represent the champion trainer, who said: "Dawn Patrol ran a lovely race at Leopardstown when he was third to Pista, who won a Group 3 at Doncaster on Thursday, so it may have been a better race than people thought at the time. We always thought he'd stay this trip and he won't mind if there's an ease in the ground. 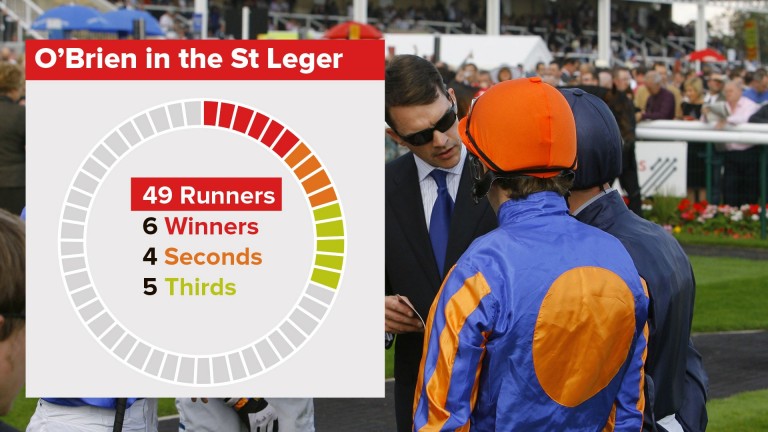 "Mythical also ran very well at Leopardstown on his last start and he will prefer a more strongly run race. We always thought he'd get further than a mile and a half."

The feelgood story of the 2020 Flat season has been the emergence of King Edward VII Stakes and Great Voltigeur winner Pyledriver, whose likeable trainer William Muir seeks the biggest success of his career after 30 years with a licence.

"The horse is fine and everything's grand," said Muir, whose son-in-law Martin Dwyer will ride. 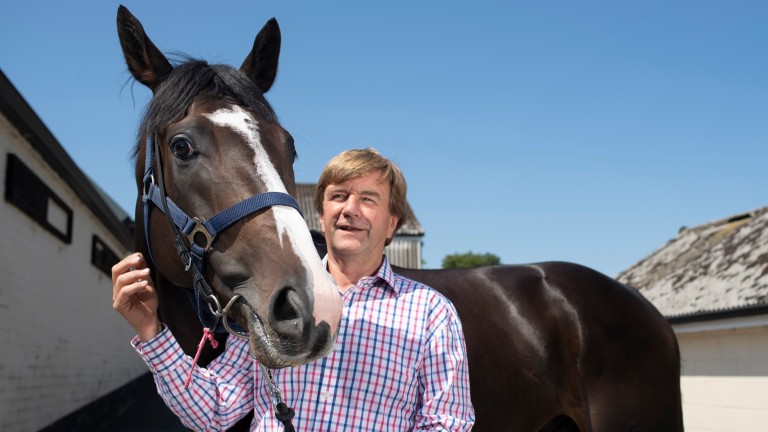 "He did his routine stuff on Friday morning and was good, while he's bonny and eating well. He's in great shape.

"I don't care what the ground is. He won on firm at Salisbury first time out when people were saying it was rock-hard and then he won in testing ground at Haydock.

"I'm too old now to worry about being in the spotlight and I'm at Sandown now and drove the horsebox to Kempton on Wednesday, but I'm excited.

"People have said he hasn't got a pedigree for a stayer, but his female side is stoutly bred and if we're going on [sire] Harbour Watch being a sprinter, then Pyledriver wouldn't have got a mile and a half, which he gets well. He's proven the dam's side is having a big influence and he will settle because he doesn't pull.

"We've never been in this situation; we're normally 25s, 50s, 66-1 in major races, but the industry is saying we're favourite and deserves to be there and we'll give it a good shot."

Hukum 'has done nothing but please since Ascot'

Owen Burrows, like Lambourn counterpart William Muir, saddles one of his biggest runners in Hukum, another who struck at the royal meeting in June before landing Newbury's Geoffrey Freer last month.

"This is what it's all about, but you can ask the wife if I'm keeping my cool!" Burrows said.

"I was very fortunate and probably didn't appreciate it at the time, but about my 12th runner [Massaat] was second in the 2,000 Guineas and Talaayeb was fourth in the 1,000 Guineas in my second season, but since then we've not been at the top table, so to have a horse like Hukum is what we all do this job for.

"It's nerve-racking, but you've got to enjoy it. Once you're at this level, you want to stay there." 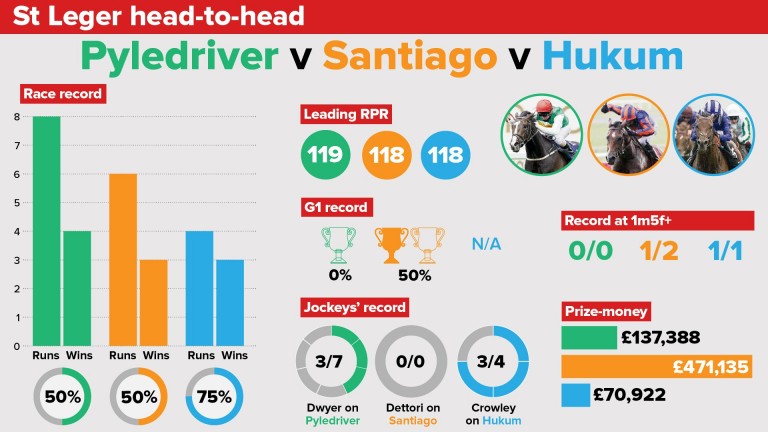 The former jump jockey, a salaried trainer to Hukum's owner-breeder Hamdan Al Maktoum, added: "He wasn't pleasing us massively before Ascot – he wasn't showing what he had as a two-year-old – but has done nothing but please since and he did a really good solid bit of work ten days ago.

"It looks like he's going the right way and I've always felt he's pretty versatile ground-wise; I'm just pleased it's not extremes over this trip.

"He's got an okay draw in one and I'm as happy as I can be everything is in good shape."

Paul Spickett, owner of Berkshire Rocco
I probably wouldn't have slept much leading into this, but I've had a word with Andrew [Balding, trainer] and the horse is 100 per cent ready, so we're looking forward to a big run. I know we stay the trip and it's whether Pyledriver does. It'll be a great day and just to be in a Classic is unbelievable.

Joseph O'Brien, trainer of Galileo Chrome
He looked very good at Navan. Shane [Crosse] gave him a lovely, patient and confident ride and he won very well. He won in the style of a horse who has earned a crack at a step up in class. It's a tough race but Galileo Chrome has an unexposed profile and there could be more to come.

David Simcock, trainer of Mohican Heights
He's as good as gold. The Derby was a total non-event, badly positioned and never able to get into the race. He took it quite badly and it knocked him back. He's had time to freshen up and is training well, while on the best of his form – last year and this – he's a chance of running very well. Epsom didn't do him any favours, but he's recovered and looks good now. The trials came too soon for us, but he's pretty clean-winded and doesn't take a lot of getting fit. He's not a quick horse and should relish the trip. 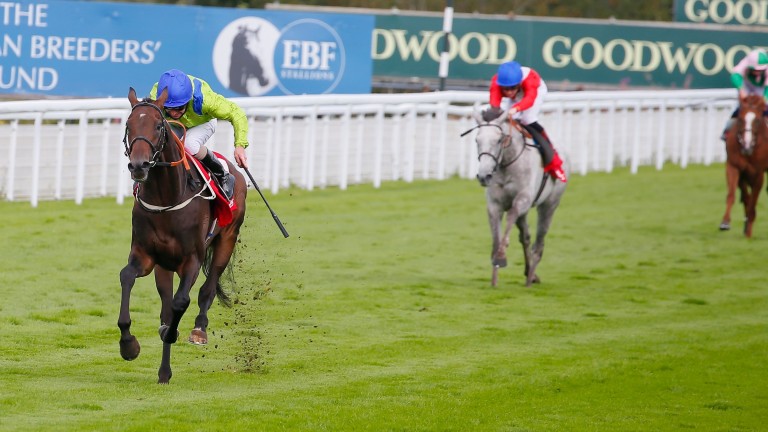 Jim Walker, owner of Subjectivist
He was impressive at Goodwood last time and is crying out for 14 furlongs and probably more. He's got the right distance here, but it's a Group 1, so I'm just excited to be involved. He's facing horses who've beaten him before, but at a different distance. Hopefully, he can set the pace and is the one they have to catch.

Andy Slattery, trainer of Sunchart
He has decent form and 50-1 is a big price. He will stay. I know he was beaten 13 lengths by Santiago in the Irish Derby, but you can knock that down to at least half that as we rode him too far back. He couldn't be better and we're hopeful of a very big run.

Richard Spencer, trainer of Tyson Fury
We held him in high regard last year, but he was a very big horse and needed time. We've had the Leger in mind, but haven't been able to go again; we didn't want to run him on extremes of ground. It's a big ask, but fingers crossed he can run well.

What A Shout: 'It'll be some story if Pyledriver won the Leger!'

Lester on the St Leger: 'The two best ones look to be Santiago and Hukum'

FIRST PUBLISHED 6:00PM, SEP 11 2020
We've Andrea Atzeni on board and he knows and rides Doncaster well