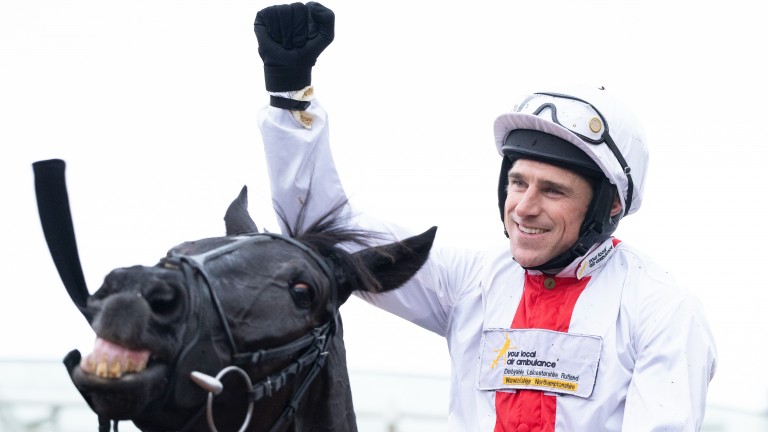 Harry Skelton celebrates on Nube Negra after their Shloer Chase victory
Edward Whitaker
1 of 1
By James Stevens UPDATED 9:11AM, NOV 15 2021

Nube Negra thrust his name back into the Champion Chase reckoning with a dazzling six-length win in the Shloer Chase at Cheltenham, leaving trainer Dan Skelton enthusiastic to clash with the superstars of the two-mile chase division later this season.

The seven-year-old already has experience at jump racing's elite level having toppled Altior at Kempton last December and being only narrowly touched off by Put The Kettle On in last season's Champion Chase. Yet the impression he left on this seasonal return suggested he is a much improved horse, and Paddy Power reacted by slashing his price to 10-1 (from 20-1) for his Cheltenham Festival target.

Unlike Put The Kettle On, who always appeared to be struggling, Nube Negra always looked in control of the four-runner heat. He jumped emphatically and moved dangerously throughout under a confident Harry Skelton.

He stalked the admirable Politologue, looking to make his 30th start a winning one, and quickly went from looming dangerously to seizing control, surging ahead from two out and staying on powerfully.

Now Skelton is relishing having a crack at the likes of Shishkin, Chacun Pour Soi and Energumene, and it could come as soon as next month, with the Tingle Creek at Sandown a possibility for Terry Spraggett's Spanish-bred. He was cut to 4-1 for that Grade 1 in which Shishkin tops the betting at 8-11.

Skelton, who tapped Politologue's trainer Paul Nicholls to say "sorry boss" in the aftermath of the race, said: "That was brilliant, absolutely magic and I'm chuffed to bits. It's a big race and I made a call about two weeks ago to have him in the way the ground was going. 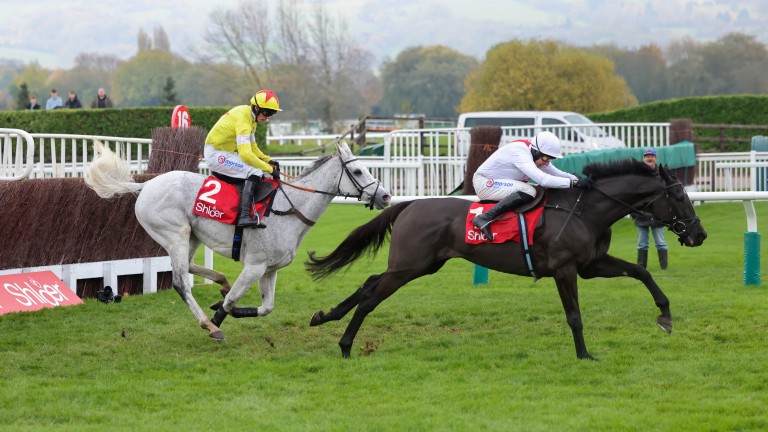 "It was a solid race, Politologue looked fit and kept galloping all the way so I think it's true form. I'm very, very proud of my horse, he's great fresh.

"He's a seven-year-old so he's entitled to get a bit stronger and better. Shishkin is seven as well and I know, technically and visually, has achieved more than ours has, but they're both seven. I think our horse handled this tacky ground better as he is that bit older and stronger. I'll give him a go."

And of likely next targets, he added: "I don't know yet. He'll get a Sandown entry and we'll consider Kempton again as he's so good there. But he's going to come back here [Champion Chase]. He was just beaten last season, and I know there's a lot of chat about the slow-run race and him being the fast horse who was lucky to be second. I don't think he was lucky now."

Harry Skelton added: "He travelled very well throughout the race and saw it out well. He's hitting the line really hard now which is very encouraging. We've got a really good horse on our hands, he did really well and there should be lots to look forward to."

For Put The Kettle On, it was her first defeat on her fifth try at Cheltenham, and jockey Aidan Coleman believes the ground was not soft enough for the Henry de Bromhead-trained mare. She appeared to be in trouble down the back straight, but made late ground to finish ten and a half lengths behind the winner. Paddy Power subsequently introduced her into the Ryanair Chase betting at 20-1.

Coleman said: "They just had a bit too much speed for her. Usually on that ground, they don't come back. I finished with loads of mare. She wasn't tired at the line.

"We've gone quick and on that ground they don't stop. I was waiting for the pace to collapse, but she couldn't quite get into it. She hit the line strong and there's a lot of positives. It was just too dry for her."

Confirmed runners and riders for Saturday's Tingle Creek at Sandown 'He's got a lion heart' - Blaklion rolls back the years with popular success Racing Post to sponsor next week's December Gold Cup at Cheltenham Confidence for Reprieve repeat bid in Welsh National despite lack of prep run What's on this week: Tingle Creek tops sensational weekend of big-race action Gutsy Aye Right finally has his day to the delight of Graham and Bewley